Most of the roads in downtown Toronto have reopened after another protest against COVID-19 restrictions was held in the city Saturday.

Hundreds of protesters carrying placards and waving Canadian flags gathered at Queen's Park on Saturday and marched through downtown streets, calling for the end of vaccine mandates and other public health measures.

Just before 12:30 p.m., Toronto police closed stretches along the Don Valley Parkway and Gardiner Expressway in an effort to prevent trucks and other "Freedom Convoy" vehicles from reaching the downtown core. "That's just to ensure, again, that we don't have convoys of vehicles, trucks and supporting vehicles that are looking to descend on the downtown core and block our roadways and impede traffic and impede access to the hospital care," Staff Supt. Lauren Pogue said.

Ahead of the protest, police closed the areas surrounding the Ontario legislature and Hospital Row, where some of the city's busiest health-care facilities were located. On Saturday morning, the city also announced additional road closures in the core.

In an evening update, Toronto Mayor John Tory said all roads have reopened except University Avenue from Dundas Street to College Street and Queen's Park Circle from College Street to Bloor Street. 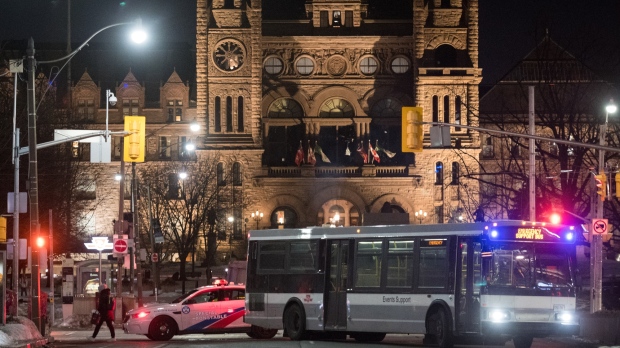 Tory said in a statement that he is grateful that Saturday's demonstration in the city was "by all accounts peaceful and respectful."

"Police are continuing to monitor 'convoy' protests across Ontario and are prepared to immediately reinstate road closures should it prove necessary," Tory said.

The province issued an order Saturday morning, saying it would protect international border crossings, as well as the 400-series highways, airports, bridges, ports and railways in the province.

Fines for non-compliances will be severe, Premier Doug Ford said, with a maximum penalty of $100,000 and up to a year imprisonment.

Police said they are discouraging people from coming into the downtown core due to the closures.