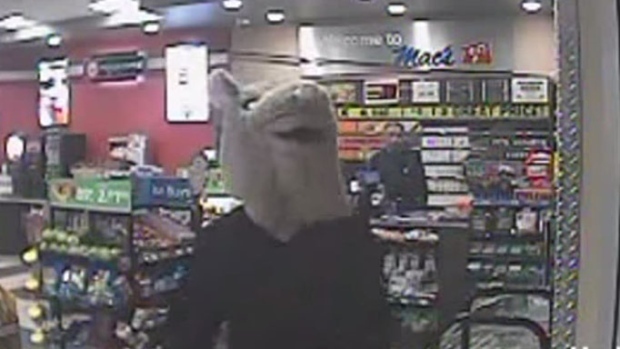 A suspect wanted in a convenience store robbery in Barrie, Ont. can be seen wearing a rat mask in this surveillance photo released by the Barrie Police Service on Tuesday, July 14, 2015.

BARRIE, Ont. - A robbery in a city about 85 kilometres north of Toronto is making international headlines.

Police in Barrie, Ont., are looking for a suspect who robbed a convenience store armed with a knife while wearing a plush mouse or rat mask over his head.

A headline in The Telegraph says "Canadian police are on the hunt for a barefoot man disguised as a mouse."

The Irish Examiner posted the surveillance video online with the headline "CCTV: Watch man disguised as a mouse rob shop at knifepoint."

Police say the robber made off with a quantity of cash in the incident early Tuesday and left the mask and knife outside the store.

The suspect is described as a barefoot six-foot, skinny white male, who was wearing black pants, and a long sleeve shirt.