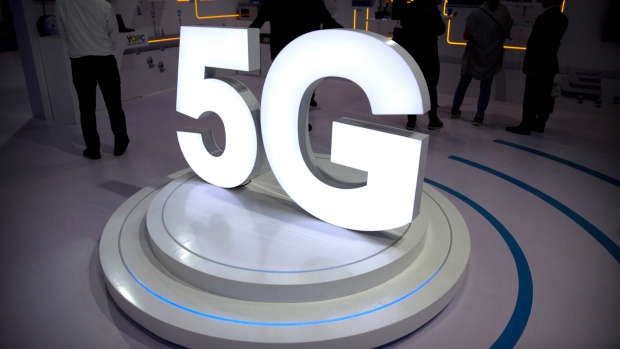 In this Sept. 26, 2018, file photo visitors stand near a 5G logo at a display the PT Expo in Beijing. (AP Photo/Mark Schiefelbein, File)

TORONTO - Rogers Communications Inc. has been selected to build more than 300 new towers to improve wireless service in underserved parts of Eastern Ontario, in a previously announced public-private partnership process..

About half of the funding for the $300-million project will come from governments at the federal, provincial, and municipal levels.

Rogers will provide the other $150 million and lead the project, which will cover more than 100 municipalities and several First Nations communities.

About $10 million will come from organizations representing cities and counties in Eastern Ontario, who had previously arranged for the provincial and federal governments to provde $71 million each for its “cell gap” project.

They each represent ridings in the Peterborough area.

Construction of nearly 350 new transmission towers will begin this spring and continue through 2025. More than 300 existing towers will be upgraded.

Among the larger cities covered by the project are Peterborough, Pembroke, Cornwall, Kingston and Belleville, Ont.

Among the First Nations involved are Mohawk communities in the Bay of Quinte area near Belleville and Akwesasne near Cornwall.

The announcement comes as Rogers and its rivals race to update and expand their networks to provide fifth-generation wireless services.