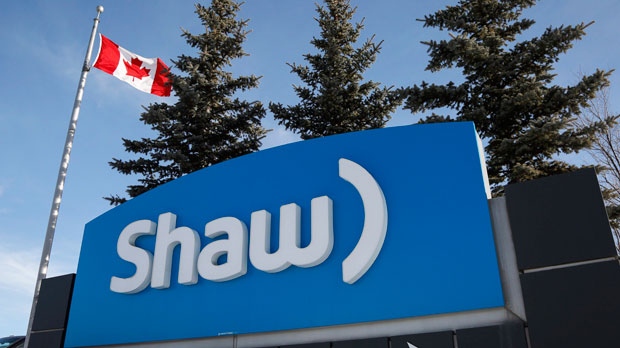 A Shaw Communications sign at the company's headquarters in Calgary on January 14, 2015. THE CANADIAN PRESS/Jeff McIntosh

TORONTO - Rogers Communications Inc. said Monday it will buy Shaw Communications Inc. in a deal that would combine Canada's two largest cable operations even as it's expected to face regulatory scrutiny over competition concerns in the wireless industry.

Valued at $26 billion including debt, the proposed deal comes at a pivotal time for cable and phone companies.

Although Shaw and Rogers aren't direct competitors in cable and internet because their networks are in different parts of the country, they have been fierce combatants in the wireless sector since Shaw bought the former Wind Mobile in 2016.

“As is the case in all telecom combinations, we expect there to be some pushback from the regulatory bodies given the potential impact this transaction would have on competition and wireless pricing,” wrote Canaccord Genuity analyst Aravinda Galappatthige in a note to clients.

Rogers chief executive Joe Natale told analysts in a morning conference call that it's too early to speculate on whether the competitors will be required to divest any of their operations before approval is granted from federal regulators, including the Competition Bureau.

“But we feel confident this transaction will be approved,” Natale said.

“This transaction does not get done without regulatory approval. It's our responsibility to make that happen. And we're going to sit down with regulators and just work through the pieces.”

Competition lawyer Michael Binetti said the companies may have to be willing to make divestments with surgical precision, on a street-by-street or market-by-market basis.

“As opposed to wielding a sledgehammer to try to break it apart completely,” said Binetti, a partner at Affleck Greene McMurtry LLP.

They both compete against the other national wireless companies owned by Canada's biggest phone companies: Bell (including Virgin Mobile and Lucky Mobile) and Telus (along with its Koodo and Public Mobile brands). Rogers, Bell and Telus make up the so-called Big Three national carriers.

“If the transaction can go through without a divestiture of wireless, it would be a key positive for all three (national) wireless names (especially Rogers of course),” Galappatthige said.

If Shaw is forced by regulators to sell Freedom, which has little presence east of Ontario, he said Videotron owner Quebecor Inc. would likely be at the front of the line.

Laura Tribe, executive director of consumer advocacy group OpenMedia, said in a statement that the government shouldn't approve the deal.

“We need more competition in Canada - not less,” Tribe said in a statement.

“Over the years, we've seen competitor after competitor swallowed up by the Big Three. The result is always the same - more profits for the Big Three, worse plans and less choice for Canadians. We can't afford this deal.”

Francois-Philippe Champagne, the federal minister of Innovation, Science and Industry, issued a brief statement that said he wouldn't predict the outcome of the regulatory reviews - but repeated the Liberal government's promises of greater affordability, competition and innovation in the telecom sector.

“These goals will be front and centre in analyzing the implications of today's news,” Champagne said.

Conservative MP Pierre Poilievre issued a similar statement saying his party “will be reviewing this deal to ensure it helps create competition, affordability for Canadians, and jobs.”

Executives from the two companies revealed few details regarding how they expect to achieve $1 billion of synergies in within two years of closing the deal, mostly from cost savings.

However, they did say on a joint conference call with analysts that savings in operating expenses will likely be more significant than savings from capital spending.

As part of the transaction, the companies said Rogers will invest $2.5 billion in 5G networks over the next five years across Western Canada.

The combined company plans to maintain a regional headquarters in Calgary, where the president of Western operations and other senior executives will be based.

Kenney said he would hold Rogers to its commitments about employment and investment in Western Canada if the deal goes through, and would like to see regulatory approval contingent on the company making good on those promises.

Rogers chief financial officer Tony Staffieri said that, with the regulatory approvals still at least a year away, there are too many variables to make predictions on cost cutting.

The acquisition would see Rogers pay holders of Shaw's class A and B shares $40.50 in cash per share, while the Shaw family will receive some of their payment in Rogers shares.

Rogers said it has secured committed financing to cover the cash portion of the deal, while about 60 per cent of the Shaw family shares will be exchanged for 23.6 million Rogers B-class shares.

Brad Shaw, and another director to be nominated by the Shaw family - which will become one of the largest Rogers shareholders - will be named to the Rogers board.

This report by The Canadian Press was first published March 15, 2021.