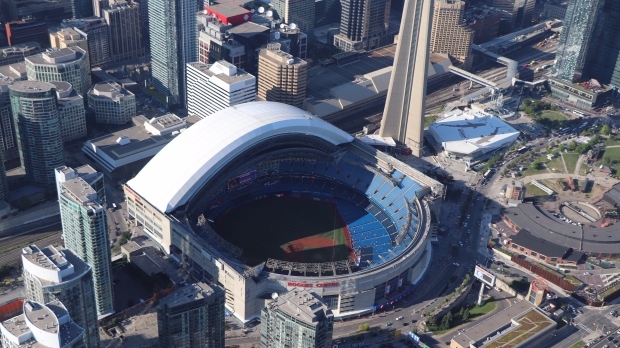 Rogers says that it was “exploring options” regarding the future of its downtown baseball stadium at one point but has put those plans on hold while it continues to deal with the fallout from the COVID-19 pandemic.

The news comes in the wake of a report in the Globe and Mail, which suggested that the telecommunications company and the developer Brookfield Asset Management Inc. were working together on a plan that would see them tear down the Rogers Centre and build a new stadium in its place as part of a broader redevelopment.

The newspaper, citing unnamed sources, said that the two partners hoped to build a new “baseball-focused stadium” on the southern end of where the Rogers Centre currently stands and turn the northern portion of the 12.7-acre site into “residential towers, office buildings, stores and public space.”

Rogers, however, released a statement to CP24 on Friday morning, suggesting that it has put any plans on what to do with the current stadium on hold due to COVID-19.

“Prior to the pandemic, we were exploring options for the stadium but through this year our primary focus has been keeping our customers connected and employees safe, so there is no update on the Rogers Centre to share at this time,” the statement reads.

The Rogers Centre opened in 1989 at a cost of roughly $570 million, or about $1 billion in today’s dollars.

It was the first stadium ever built with a fully retractable motorized roof, something that it received widespread acclaim for at the time.

But the stadium is now one of the oldest in baseball and lacks the amenities of more modern ballparks.

In a statement provided to CP24 on Friday the city councillor who represents the downtown ward where the Rogers Centre is located, said that he did have preliminary discussions with Rogers and Brookfield “about the future of the Rogers Centre in broad terms” more than a year ago but has not heard anything further since the beginning of the COVID-19 pandemic.

“As I said at the time, it is my belief that a ballpark is an important anchor for downtown and the city as a whole. If there is any ambition for a broader land revitalization, we need to work together to ensure it adheres to good planning principles and a good public process,” Joe Cressy wrote in the statement. “If and when Rogers, Brookfield, and the Blue Jays are ready to restart these discussions, I will work collaboratively to ensure that the City of Toronto plays an active and leading role, ensuring the public is engaged throughout and public interests are represented.”

Rogers acquired the stadium, then known as the SkyDome, in 2004 for $25 million.

In recent years there had been talk about changes to the stadium with Blue Jays President Mark Shapiro telling BNN in 2019 that the team was “committed to continue to improve the building” in the short-term but has some “other plans” for the longer-term.

“We are trying to be really careful and make sure that we don’t just do something but we get it right for this fan base for the long haul,” he said at the time.