Rogers says its wireless and internet services “are starting to recover” after a day-long outage across wide swathes of Canada.

A Rogers spokesperson told CP24 that engineers and technicians were “working hard to get everyone back online as quickly as possible.”

“As our services and traffic volumes return to normal, we will continue to keep our customers updated.”

Rogers CEO Tony Staffieri said the company could not say exactly when that moment would come.

"We don’t yet have an ETA on when our networks will be fully restored but we will continue to share information with our customers as we restore full service."

The firm did not say what caused their service to go down on Friday but Staffieri said they would investigate "the root cause of this outage."

Also on Friday evening, a senior spokesperson for Rogers told CTV News Toronto they would be "proactively crediting all customers" for their trouble with details to be announced later. 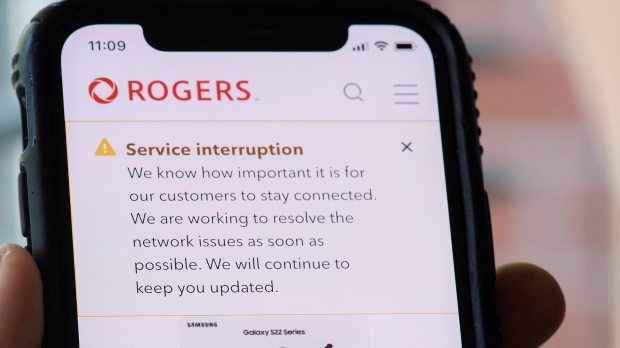 When is Rogers going to be fixed?

Federal Innovation Minister Francois Phillippe Champagne told CP24 on Friday night he had word that “that suggests that some service may have been re-established.”

But he said the network was not fully operational yet and the length of the outage was not acceptable.

“This is obviously unacceptable we will be investigating that to make sure it does not happen again.”

He said the Canadian Radio-television and Communications Commission would meet with Rogers leadership on Saturday.

Elsewhere in the federal government, intelligence analysts told Public Safety Minister Marco Mendicino that they believed the outage was not caused by an external cyberattack.

There have been widespread implications of the outage in Ontario, including for people trying to call 911.

Toronto concert venues urged patrons to print out physical copies of tickets because many virtual ticket reading applications are out of service due to the outage.

Scarborough Health Network in Toronto is asking all physicians and staff who are currently on call to come in for their shift until the disruption is solved. Many users have taken to social media to source information on the situation.

Toronto pop superstar The Weeknd announced that his tour stop at Rogers Centre has been postponed to a later date “due to service outages impacting venue operations.”

“Information on a new show date will be shared as soon as possible,” a statement read. “All tickets will be honoured for the new date. We understand how disappointing this is and apologize for the inconvenience.”

In April 2021, Rogers experienced a country-wide outage that saw many unable to place calls, send text messages, or access their internet browers. The communications company attributed this outage to a software issue.

In a tweet Friday morning, Bell said their customers may be experiencing issues while trying to call or text Rogers customers.

"The Bell network is operational and calls and texts between Bell customers or to other providers are not impacted," the company said. CP24 is a division of Bell Media.

Interac said in a statement that the outage has also affected its online services.

"There is currently a nationwide communications outage with a network provider which is impacting the availability of INTERAC services," Interac said on Friday.

Many retailers and businesses are also facing trouble trying to accept payments because Interac, which processes electronic financial transactions, said its online and checkout debit offerings and e-transfer services are impacted.

"There is currently a nationwide communications outage with a network provider which is impacting the availability of INTERAC services," Interac said on Friday.

Downdetector, a website that tracks outages, showed people started reporting problems with Rogers' service around 4:30 a.m. EDT and by 7 a.m. 20,000 reports had been logged.

Customers in Toronto, Kitchener, Moncton, Ottawa and Mississauga logged the most reports on the website with 45 per cent saying they were experiencing a total blackout, 29 per cent seeing issues with mobile internet and 26 per cent facing landline internet problems.

TekSavvy said in a tweet that it was being impacted by the outage and having trouble with contact centre phone lines, but had no estimate for when there could be a resolution.

"The outage is illuminating the general lack of competition in telecommunications in Canada," said Vass Bednar, executive director of McMaster University's master of public policy program.

The country's telecom sector is dominated by three large carriers -- Rogers, BCE Inc. and Telus Corp. -- and their hold on the industry has long been a concern of academics, who have called for regulators to increase competition for mobile and internet services in Canada.