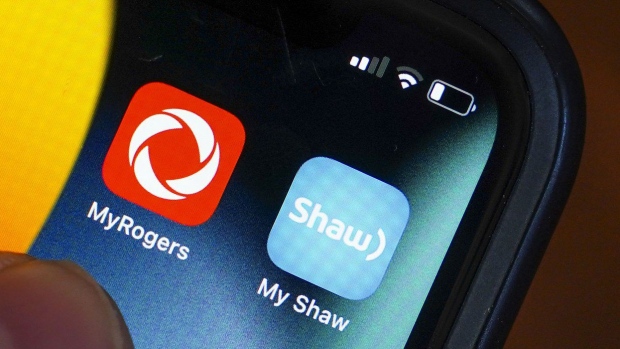 Rogers and Shaw applications are pictured on a cellphone in Ottawa, Monday, May 9, 2022. THE CANADIAN PRESS/Sean Kilpatrick

Speaking before the Competition Tribunal, Dalhousie University's Lars Osberg said low-income Canadians, who are already facing inflationary pressures, will feel the most pain if telecom prices increase as a result of the merger.

Osberg said access to cell phones and connectivity is just as essential as food in today's digital age.

Rogers pushed back against Osberg's claims, pointing to the CRTC's decision to approve the deal, noting that the regulator examined how the merger would impact consumer interests, including low-income households, seniors and people with disabilities, before doing so.

Rogers also referred to the Canadian Radio-television and Telecommunications Commission's 2021 review of wireless services where it lays out the expectation that telecom companies offer a low-cost plan, which Rogers said it offers through its Fido brand.

Additionally, Rogers pointed to the company's intention to extend its Connected for Success wireline program to Western Canada if the deal is approved. The program offers high-speed internet and bundled services at a discounted price to low-income Canadians.

Rogers said it plans to introduce a Connected for Success wireless program nationally as well if the deal is approved.

In cross examination, counsel for the Competition Bureau referred to the 3500 MHz spectrum Videotron acquired in 2021, which Lescadres said it had been considering for growth across Canada even before the merger announcement between Rogers and Shaw.

The network sharing lawsuit between Videotron and Rogers was also brought up in cross examination. Lescadres said Videotron remains confident that the lawsuit will be settled.

This report by The Canadian Press was first published Nov. 18, 2022.