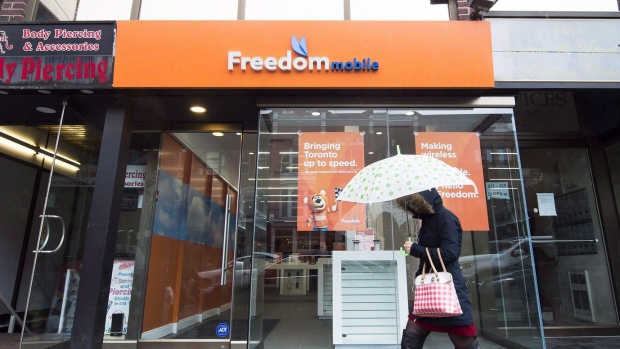 A woman walks past a Freedom Mobile store in Toronto, Thursday, Nov. 24, 2016. Rogers Communications Inc. says it will sell Freedom Mobile Inc. to Quebecor Inc. for $2.85 billion in a deal it hopes will appease the concerns of federal regulators about its proposed takeover of Shaw Communications. THE CANADIAN PRESS/Nathan Denette

The cash-free, debt-free deal was announced late Friday and will see Quebecor buy all of Freedom's branded wireless and internet customers, as well as its infrastructure, spectrum and retail locations.

The parties were working to reach a deal for weeks, while the Competition Bureau has been seeking to block the $26-billion Shaw merger over concerns it would substantially prevent or lessen competition in wireless services.

Rogers, Shaw and Quebecor argued their agreement would effectively address those concerns and keep alive a “strong and sustainable” fourth wireless carrier in Canada because the deal would expand Quebecor's wireless operations nationally.

“This agreement between proven cable and wireless companies will ensure the continuation of a highly competitive market with robust future investments in Canada's world-class networks,” said Tony Staffieri, president and chief executive of Rogers, in a release.

Shaw CEO and executive chairman Brad Shaw labelled the deal “an important milestone in our bold and transformative journey to join together with Rogers.”

“We have always believed that for there to be healthy competition in wireless services only a player with a proven track record can successfully enter the market,” he said in the same release as Staffieri.

“This is a value-added transaction for all consumers and the Canadian economy.”

Quebecor beat out several other parties to reach the deal.

Globalive Capital signed a network and spectrum sharing agreement with Telus Corp. in May to boost its bid to purchase Freedom. Formerly known as Wind Mobile, Freedom was founded by Globalive founder and chairman Anthony Lacavera in 2008.

Quebecor's offer was $900 million less than Globalive's bid, Lacavera said in an email to The Canadian Press.

He claimed Rogers didn't accept his bid because Globalive would be a long-term competitor, whereas Quebecor's Videotron is a regional cable company that cannot risk retaliation from the Big Three - Rogers, Telus Corp. and BCE Inc.

“Rogers is afraid to compete,” Lacavera said. “They have shopped this deal to a succession of billionaire friendlies and friendly parties who won't compete with them (and) are willing to sell Freedom back to them at any time.”

The Rogers-Shaw transaction announced in March 2021 already has approval from the shareholders of Shaw and the Canadian Radio-television and Telecommunications Commission.

However, it remains subject to review by the Competition Bureau and the Minister of Innovation, Science and Economic Development.

The Competition Bureau expanded its opposition to Rogers' proposed takeover of Shaw in new submissions made to the Competition Tribunal on Friday.

In legal filings released after markets closed, the agency challenged Rogers' claims about efficiencies and said acquiring its closest rival is anticompetitive and would harm consumers through higher prices, lower quality services and lost innovation.

It also argued the proposed sales of Shaw's Freedom is “not an effective remedy” because it won't replace the growing competition Shaw Mobile would deliver in Alberta and British Columbia and would make Freedom “a subsequently weaker competitor” than it would have been.

The bureau said the efficiencies Rogers claims the deal will create are insufficient to offset the anticompetitive effects and are “speculative, unproven and unlikely to be achieved ... or are grossly exaggerated.” It added that stated efficiencies are based on “unrealistic assumptions and flawed methodologies.”

The Competition Bureau also said a subsequent increase in prices would result in wealth flowing from low- and moderate-income groups to shareholders including ultrarich members of family ownership groups of the companies.

Five weeks of Competition Tribunal hearings on the matter are scheduled to begin the week of Nov. 7, followed by written and oral arguments.

-- with files from John Cotter in Edmonton