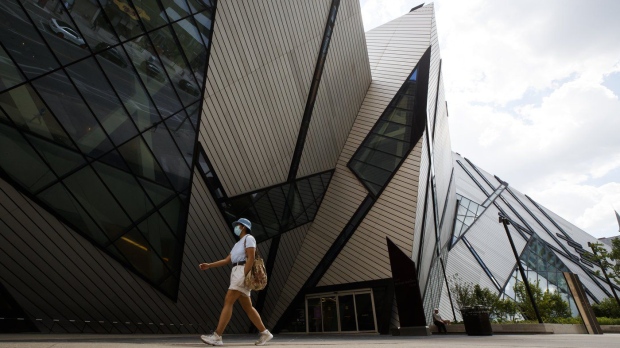 A person wearing a mask walks by the Royal Ontario Museum in Toronto, on Friday, June 26, 2020. The Royal Ontario Museum will allow visitors into its main floor for free this summer in an effort to draw crowds. Starting June 9 and running through Sept. 25, 2022, the first floor galleries will be accessible to the public without a fee. THE CANADIAN PRESS/Cole Burston

TORONTO - The Royal Ontario Museum is making access to its first floor free for the summer as part of a branding campaign it hopes will usher new people through the door and redefine its role in Toronto.

The downtown landmark wants to become a gathering place rather than a fusty day trip destination, where people can stop in to drink coffee and engage with culture, said Josh Basseches, the museum's director and CEO.

“We want as many people from all backgrounds, all ages, whether born here in Canada or coming from around the world, to feel like this is their place,” he said. “To feel like the ROM is almost a kind of a living room for them.”

The free main floor initiative began Thursday and will run through Sept. 25. The first floor includes the First Peoples gallery, as well as the China and Korea galleries and two special exhibitions about the pandemic. A Greek sculpture of a maiden, the Kore 670, is also currently on display.

“The intention now is, coming out of the pandemic, at a time when people have been in their homes cooped up, to say: come back to culture, come back to ROM,” Basseches said.

For some people, that will be natural, he said. But others may not think of museums as particularly accessible.

“There are a set of people who are already lovers of the ROM, who buy a ticket come in, become members spend lots of time here,” Basseches said. “We're trying to reach those people that may not know us, and figuring out all the ways that we can get them in the door to engage, experience and hopefully come back over and over again.”

Experimenting with free admission is common among cultural institutions looking to boost attendance, and a model the Art Gallery of Ontario has also used.

The AGO allows visitors in for free on Wednesday nights, and those 25 and under never have to pay admission. Meanwhile the Vancouver Art Gallery plans to make admissions free for visitors under age 18 starting July 1 and lasting for five years.

Cara Krmpotich, director of museum studies at the University of Toronto, said the free admission model is becoming increasingly popular for good reason.

Krmpotich said the model has worked elsewhere in the world, including at the British Museum in London.

“Its courtyard, because there was no barrier to admission, became a place where people who worked nearby would come and bring their lunch and sit in the environment,” Krmpotich said. “When I think about Toronto and our need for public spaces ... museums can serve this function for our cities and for our communities.”

She said the model doesn't necessarily have to hit museums in the pocketbook, either, because the bulk of their income is from sources other than admission.

Museums could have high-profile artists or scientists come to give lectures, which they'd charge for. They could rent out their spaces for film shoots and weddings, for galas and conferences.

And of course, they can do something like what the ROM is attempting.

“This move at the ROM has with it that you will pay additional fees to see dinosaurs or visiting exhibitions,” Krmpotich said.

Basseches agreed. Once people get into the first floor exhibitions, he said, they may feel compelled to buy a ticket to see what else the museum has to offer.

This report by The Canadian Press was first published June 9, 2022.