RSV appears to be slowing in Ontario, health minister says 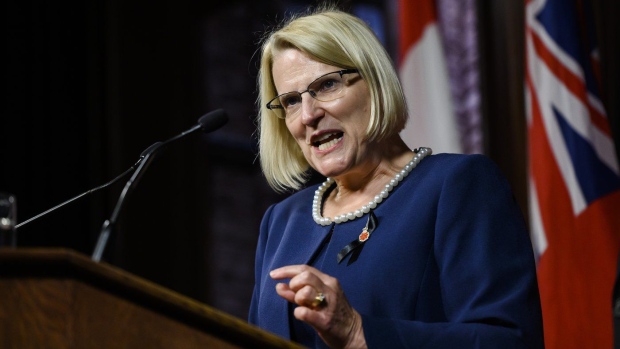 OTTAWA - Respiratory syncytial virus, or RSV, appears to be slowing in Ontario, the province's health minister said Friday, although she warned that influenza was expected to ramp up.

A combination of RSV, the flu and COVID-19 have been putting immense strain on pediatric hospitals across Ontario, with many having to cancel surgeries to accommodate the influx of patients.

Health Minister Sylvia Jones said that while RSV seems to be somewhat easing, the province is still heading into influenza season.

“We are seeing that the RSV seems to be slowing,” she said during an appearance in Ottawa.

“Of course we are heading into influenza season ... I would encourage people to, if they have not got their flu shot for themselves or their children, have those conversations and and get that done.”

Jones also urged residents to ensure they get the COVID-19 booster shots they are eligible for.

The province has been working with hospitals to ensure there is enough pediatric ICU capacity, Jones said.

Data last week indicated that at several points, Ontario had more children in the ICU than the system was built to handle.

Jones said different hospitals are experiencing capacity pressures at different times, with hospitals in the Hamilton and London area currently under strain.

“It very much changes,” she said. “We initially saw the SickKids Hospital in Toronto experience it, CHEO last week was very, very challenged. We're now seeing that move more into the Hamilton, London area.”

Jones said the province was also preparing for similar challenges in northern communities.

Pediatric hospitals across the province have said they've been well beyond capacity recently as children flood emergency rooms and intensive care units with the flu and RSV.

Earlier this week, the province asked thousands of family health-care workers to work evenings and weekends to help ease the burden on children's hospitals.

Canada's chief public health officer has said that nationally, RSV activity seems to have levelled off but rates of the common childhood illness are still expected to remain elevated for weeks to come.

Jones' appearance in Ottawa on Friday came on the last day of hearings at the public inquiry into the federal government's use of the Emergencies Act.

Both she and Ontario Premier Doug Ford had been summoned to testify at the inquiry but went to court to fight the order, citing parliamentary privilege. A court ruled in their favour earlier this month.

This report by The Canadian Press was first published Nov. 25, 2022.