TORONTO -- Ontario's education minister is defending $2.5 million in special payouts to teachers' unions, saying the groups incurred extra costs during the latest round of bargaining -- due to the Liberal government's new system.

Liz Sandals refused to reveal how much the government spent on the compensation while it is still in negotiations with the Elementary Teachers' Federation of Ontario and support staff unions.

But a memorandum of settlement shows the government agreed to pay the Ontario Secondary School Teachers Federation $1 million to compensate the union. The Ontario English Catholic Teachers' Association also received $1 million, its president said, while the French teachers' union received $500,000.

"I don't think of it as compensation per se," Sandals said after question period. "I think of it as investing in transforming a system that didn't work."

This year's talks with teachers and support staff unions were the first under the Liberals' new, two-tier bargaining system, under which the unions negotiate central deals with the province, then local deals are hammered out with the union locals and school boards.

It was a "very long process," Sandals said. It took six months alone for the parties to work out which issues would be central and which would be local.

OECTA spent 47 days in "active bargaining" and incurred many costs such as renting rooms in which to bargain, said president Ann Hawkins. The union has never received such compensation before, she said.

"The reality is, this was a brand new process," she said. "The government, well, everybody thought it might be a little bit more efficient. It turned out it wasn't."

The circumstances will not reoccur, Sandals said, because "we're never going to have to figure out every clause in every collective agreement again."

In fact, the government has also made extra payments to the school boards because of the same costs, but Sandals couldn't say what amount.

ETFO said it has neither requested nor accepted government funds, and will pay for all its own bargaining expenses.

The Liberal government said the deal was net zero, meaning the raises were offset by finding savings elsewhere.

The settlement agreement reveals the government was able to fund those raises both by offering teachers who had banked sick days under previous collective agreements smaller payouts next year instead of receiving more upon retirement, and cancelling a fund for special programs that help struggling students graduate.

In 2012 the government agreed with the unions to defer the final year of the special teacher hiring program to 2014, but since the graduation rate has gone up everyone agreed it could be cancelled, Sandals said. 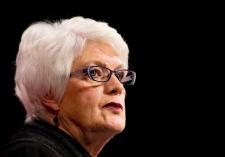 Minister of Education Liz Sandals talks during a press conference at Queen's Park in Toronto on Thursday, Jan. 15, 2015. (The Canadian Press/Nathan Denette)