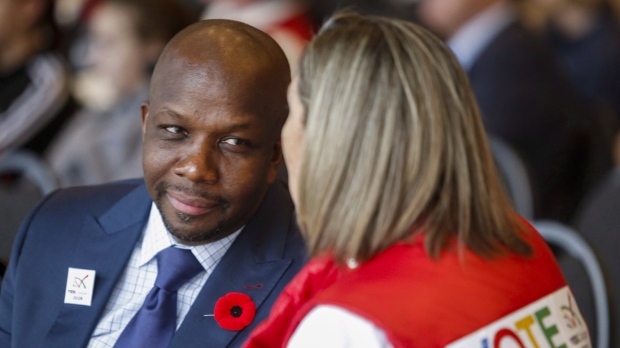 Former Olympian Donovan Bailey, left, speaks to a fan during a rally in support of the 2026 Winter Olympic bid in Calgary, Alta., Monday, Nov. 5, 2018. Bailey is among the dozens of performers, athletes, advocates and experts newly named to the Order of Canada on Wednesday. THE CANADIAN PRESS/Jeff McIntosh

“For me, I just want to be a great example for young Canadians that they themselves can follow into my footsteps,” Bailey said when reached ahead of the announcement in Vancouver.

Film director/screenwriter Francois Girard of Montreal and Angela James of Richmond Hill, Ont., who was one of the first superstars of women's hockey, were also named officers for high degree of achievement or service to Canada.

New members of the order - who are honoured for distinguished service to a particular community or field - include Toronto music industry veteran Al Mair; former MP Nancy Uqquujuq Karetak-Lindell of Arviat, Nunavut; and HIV/AIDS researcher Martin T. Schechter of Vancouver.

Karetak-Lindell says she was just five years old when she began thinking about how she could serve her small northern community.

Sixty years later, she can look back on a career of public service that includes working for the region's council and education authority and as a Liberal member of Parliament from 1997 to 2008.

“I come from a family that was taught to help others and to do it with care and love and respect, without looking to be recognized for it. So to think that people feel that I have deserved to be given this Order of Canada is a real honour,” she said when reached in Arviat.

“And of course being Inuk it means that much more with the Governor General of today being an Inuk, too.”

One of 10 children, Karetak-Lindell says she was encouraged to respect others and never forget where she was from. She credits role models including her uncle and Inuit leader Tagak Curley; her father, who was a special constable with the RCMP; and her mother, “a woman before her time” who served on local councils and organizations dominated by men.

“Our community is one of people who constantly try to help their fellow person. And that is the environment that I grew up in, along with my parents' influence. But this community always makes me feel that I could do more because they so believe in me to be able to do whatever I want to do,” she said.

Mair earns his honour after working in the music industry since the age of 12 when he sold records in a music store after school.

He went on to help grow the Canadian scene by helping launch various careers, including that of singer-songwriter Gordon Lightfoot, whom he managed for eight years. Mair also led several music organizations including the Canadian Independent Music Association and the independent label Attic Records.

He traces his passion to Expo 67 in Montreal, a spectacular world fair that marked Canada's centennial and showcased homegrown talent.

“I was convinced the Canadian artists could be at least equal to artists from any other country in the world, if not superior, and I always felt that way,” said Mair, whose label roster included Lee Aaron, Triumph, Maestro Fresh-Wes, the Nylons, and Haywire.

Recipients will be presented with their insignia at a later date in Ottawa, depending on their availability. Rideau Hall hosts an average of four investiture ceremonies a year.

Honorees get a silver insignia shaped like a six-pointed snowflake with a red annulus in the middle and a royal crown above. It also features a stylized Maple Leaf with the order's motto: Desiderantes Meliorem Patriam, which means, “They desire a better country.”

Created in 1967, the Order of Canada recognizes outstanding achievement, dedication to the community and service to the nation. More than 7,600 people from all sectors of society have been invested.