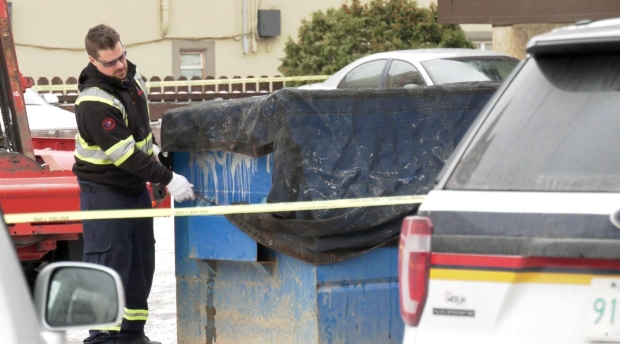 Saskatoon police were seen blocking off a dumpster in the 400 block of 5th Avenue North on Nov. 8 2019.

SASKATOON - Investigators were working Friday to find the mother of an infant found dead inside an industrial recycling bin in an alley.

Police in Saskatoon said officers who were called to the area found the baby.

Evidence suggests the infant was newborn, but it's believed the birth took place at another location.

Police spokeswoman Alyson Edwards said it was important that the mother be located.

“I would stress to her that we are here to provide her with support,” Edwards said. “This likely is an emotional and very physically taxing time for her. She's obviously in a great deal of distress and the first thing that we want to do is assist her.”

Police did not say whether the baby was a boy or a girl, or how it was found. An autopsy to determine the cause of death is to be done on Tuesday.

Edwards said one of the first steps investigators were taking was to talk to hospitals.

“We would hope that they would be contacting us if they had come across a mom who had recently given birth and didn't have a baby with her.”

Police are asking anyone who may have information to come forward.

There is an urgent need to locate the mother of this child. She is believed to have given birth recently and may be in a vulnerable physical and emotional state. Our priority is to assist in providing the supports needed to the woman involved. Please help. #yxe https://t.co/AaU2FalOII