A 32-year-veteran of the Toronto Police Service has been selected as the city’s next police chief, securing the coveted job following an exhaustive search that Mayor John Tory says was the “most thorough” in the force’s history.

Deputy Chief Mark Saunders was confirmed as the successor to Bill Blair during a news conference at Toronto Police headquarters on College Street Monday morning.

Saunders, 52, is currently in charge of Specialized Operations Command where he presides over 1,200 officers and 154 civilian members and oversees a budget of $175 million. He is also responsible for safety and security at the upcoming Pan American Games.

Blair’s last day on the job is Saturday and Saunders is expected to take on the role immediately afterwards.

Saunders provided few details on where he plans to take the TPS on Monday morning but said he will release a “full-scale road map" in the coming weeks.

As for being the city’s first black police chief, Saunders said he doesn’t think the colour of his skin is a cure-all for any sort of racial tension that may exist in the city. In fact, Saunders said he only really became aware of the significance of the milestone after his 10-year-old son pointed out the historical significance.

“Being black is fantastic but it doesn’t give me superpowers,” Saunders told reporters at the news conference. “If you are expecting that all of a sudden the earth will open up and miracles will happen that is not going to happen. What will happen is there will be lots of open dialogue, there will be a lot of open talking and I look forward to those conversations. I want to get the pulse of this city.”

Saunders mum on future of carding

Saunders takes over the TPS during a time of immense tension concerning the practice of carding, in which officers stop people on the street for questioning.

The practice has come under fire in recent months by opponents who say that visible minorities, particularly young black youth, are disproportionately targeted.

Last week the TPS board approved a new policy on carding which prohibits police from considering “race, place of origin, age, colour, ethnic origin, gender identity or gender expression” when deciding whether to stop someone, however many have said the new stipulation doesn’t go far enough.

Discussing the issue with reporters, Saunders refused to say whether he would be open to banning carding altogether, only saying that he is “open to what is best for the city.”

A married father-of-four, Saunders has risen through the ranks at the TPS over the last three decades, taking on senior positions with the Homicide Squad, the Professional Standards Unit, Intelligence Services and the Emergency Task Force before assuming his latest position.

Though carding and a ballooning police budget that now stands at more than $1 billion will likely consume much of Saunders time, the Chief-Designate told reporters that he will also make improving dialogue one of his top priorities.

Saunders also stated that "there will be change" at the TPS but did not elaborate.

“Community relationships will determine the success or failure of our service," he said. "I do not take this lightly. The ability for us to work collaboratively is crucial and I want you to know I recognize that point very clearly.”

Saunders was one of six candidates interviewed for the job of police chief.

“As far as I know this is the most thorough selection process ever undertaken for the chief of police,” Mayor John Tory, who is a member of the seven-person TPS board that made the decision, said Monday morning. “In the end we all believed Mark Saunders represented the best choice among all the excellent choices to continue and expand our efforts in community policing, to continue the necessary embrace of diversity including addressing some of the very special challenges it presents and to innovate in the delivery of police services in Toronto.”

During Monday’s news conference Saunders promised to be a police chief that will “understand” the roles and responsibilities of front-line officers and do his best to “help, assist and support them.”

Speaking with CP24 about Saunders appointment, Toronto Police Association President Mike McCormack said Saunders is a “cop’s cop,” which is good news for his union.

“He has the pedigree and the experience to understand what policing is all about,” he said. “You want to have someone who has empathy and who understands what it is like to be a police officer.”

McCormack added that he plans to meet with Saunders later this week to discuss some of the issues facing police officers, including low morale.

“The changes to policing, the discussions around Tasers, carding, and all the stuff that is happening in the states, our members are people and they react to that negative projection of what policing is and it does have an impact on what our officers are doing each and every day,” he said.

Blair, whose contract was not renewed by the board, was not present for Monday’s news conference. 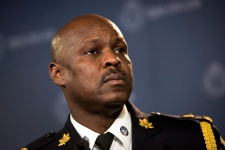 Mark Saunders, the Toronto Police chief designate, speaks to reporters while being introduced at a press conference in Toronto on Monday, April 20, 2015. (The Canadian Press/Darren Calabrese)