Saunders to lay out spending priorities to combat gun violence 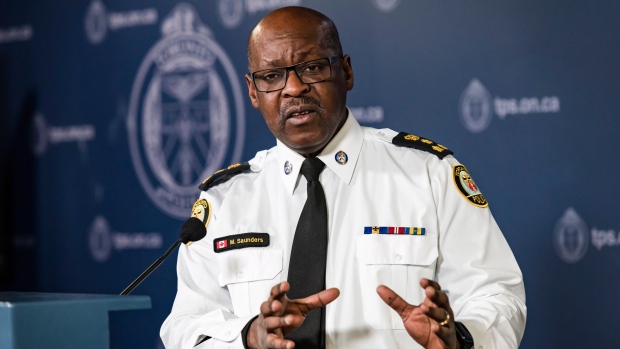 Toronto Police Chief Mark Saunders speaks to the media at a year-end news conference in Toronto on Thursday, December 27, 2018. THE CANADIAN PRESS/Christopher Katsarov

Chief Mark Saunders will be speaking with reporters this morning to explain how he plans to use millions of dollars committed by various levels of government to combat gun violence in the city.

All three levels of government have pledged funds to try to stem the gunfire amid a summer that has seen a high number of shootings.

On Monday the city announced $4.5 million, secured through a partnership between the federal, provincial and municipal governments, "to help fund immediate efforts to address the current violence."

Saunders said Monday that police have a "comprehensive plan" to tackle the issue and added that most gun violence in Toronto is directly connected to street gang activity.

Saunders will be speaking at Toronto Police Headquarters downtown at 10:30 a.m.