Several thousand protesters marched downtown this afternoon as part of the first in a series of anti-racism demonstrations planned for the city this weekend.

The rally, dubbed ‘The March for Change’ began at Bloor and Yonge streets at around noon and then headed down Yonge Street. Participants, many of them chanting "I can't breathe" and "Black lives matter" then headed westbound on Front Street before heading north on University Avenue and briefly gathering at Nathan Phillips Square.

The initial march only took about an hour but the protesters have now split into two large groups and are on the move again.

A number of rolling road closures were reported as a result of the demonstartion and are expected to continue.

[IN PHOTOS: Thousands fill the streets of downtown Toronto for an anti-racism rally]

As the march got underway earlier on Friday afternoon, Police Chief Mark Saunders was briefly seen kneeling with the protesters and several members of his command group in the intersection of Yonge and College as a show of solidarity.

He told reporters afterwards that he “thanked” the protesters and told them that their message was “important.”

“I am hoping from the bottom of my heart that this is going to be a peaceful protest,” he said. “I know that 99 per cent of the people are here peacefully and they are sending a message that is important.”

My Command and I met protesters today and we took a knee. We see you and we are listening. The ⁦@TorontoPolice⁩ fully supports peaceful and safe protests this weekend and always. We have to all stay in this together to make change. #Toronto #PeacefulProtests pic.twitter.com/XM9Xd64irS

"I have a great deal of respect for Chief Saunders – showing incredible leadership – I saw the picture and man was that impactful."

Meanwhile Knia Singh, lawyer for the family of Regis Korchinski-Paquet, called the move a "very refreshing symbol" but said it shouldn't detract from the fact that people of colour continue to end up dead at the hands of police.

"It’s good that Mark Saunders is taking a knee. He said that he’s listening – but we want action, the community wants action," Singh said. "Why is there a history of the TPS interacting with people in either crisis situations or non-crisis situations and they’re ending up dead."

Dozens of people gathered at Nathan Phillips Square on Friday evening to hold a candlelight vigil to honour people killed by police brutality.

Addis Wara, who co-organized the vigil, said she wants people to remember and mourn those who died in the hands of police.

"All I've seen is rage, violence, hate, and I haven't seen anyone actually mourn," Wara said.

Before the vigil, people were chanting "no justice, no peace," "Black lives matter," and "Black is beautiful." 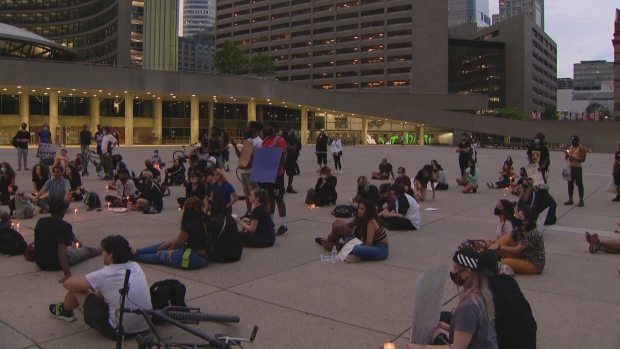 They then lit their candles and paid tribute to those victims of police violence, including Breonna Taylor, who would have been 27 today.

Taylor was shot and killed by Kentucky police in her home during a warrant search in March.

"People are suffering, and it's painful to see someone die at the hands of an ignorant police officer," Mobashira Sharif, who attended the vigil, said.

"This has been going on for years and decades and centuries, where people do not feel equal."

Michael Ranger said he came to the vigil to show his support.

“We're not saying only Black lives matter,” Ranger said. “We're just talking about something that's injustice and it's happening to the Black community.

Some businesses have been boarded up

In anticipation of this weekend’s protests in Toronto a number of downtown businesses have boarded up their windows.

On Friday, morning CP24's cameras captured crews putting up plywood sheets along the exterior of College Park shopping complex near Carlton and Yonge streets. On Thursday night, crews were also seen doing the same at several businesses near Yonge-Dundas Square, including the Eaton Centre, the Saks Fifth Avenue department store, a Shopper’s Drug Mart location and a Foot Locker store.

Meanwhile, the Eaton Centre has announced that it will be closed on until Monday due to a “number of large gatherings planned in the city.”

“Right now by all accounts it looks good, it looks healthy, the vibe is good and I hope that it stays this way throughout this weekend,” Saunders said on Friday afternoon as the protesters made their way down Yonge Street. “The day is not over the night is not over yet so things could change and we are prepared for all of that. I just hope that at the end of the day the message is done safely and after that message has been manifested we all move towards action because I think that is what this is all about.” 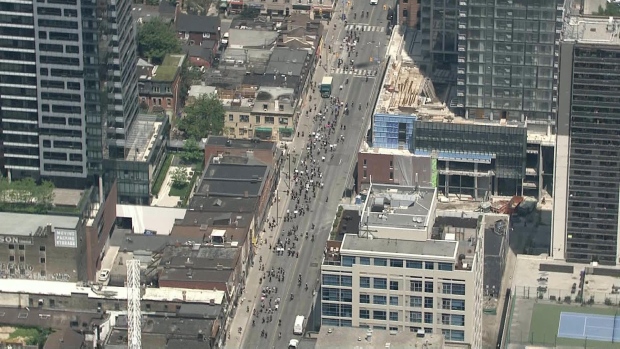 The organizers behind today’s “March for Change” demonstration sent out a statement on Friday morning reiterating that their intent was to put on a “peaceful” event for those who want to protest “against the cruelty to black lives and the crooked system.”

They said that they received “lot of concern and backlash” from people concerned about reports of “riot groups coming into the city” and for that reason have adjusted their plans to encourage demonstrators to march in groups of five or less and have volunteers keep the march “flowing.”

“Personally I am glad some storefronts are boarded up. We are here for peace but there is always a risk and we don't want that to reflect on us,” Delsin Aventus, who is helping to organize the rally, told CP24. “Our team has been working very, very hard to minimize risk for the community and the citizens that live here as well as businesses. Our behavior here reflects on our character and on the way we are looking for change.”

Aventus said that organizers of the protest “do not stand with anyone who comes to loot or riot or cause any troubles.”

He said that the protest, rather, is about “creating a platform for change in the community” and “fighting against systematic racism.”

Liberal MPP Mitzie Hunter then echoed those remarks while speaking with CP24 at Nathan Phillips Square on Friday afternoon. She said the rally has been a “very powerful demonstration” by people who have come together “because of what is happening” in the world right now.”

“There has been an awakening with the horrific death of George Floyd. People are saying enough is enough. We need a change. We need a change in our province, in our city and black lives do matter,” she said. 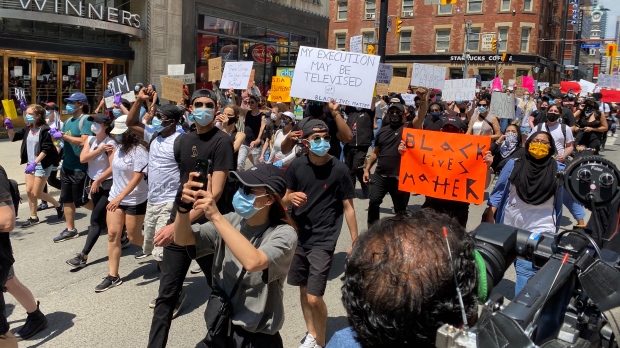 There have been reports of plywood shortages due to the large number of businesses that have decided to board up their windows in advance of the planned protests.

The Best Buy location near Bay and Dundas streets already boarded up the entrance to their store on Monday after the Downtown Yonge BIA notified its members about information it had received about possible vandalism downtown from a “credible source.” The Bay department store on Queen Street West also did the same.

Speaking with CP24 earlier this week, Mayor John Tory said that there was some online rumours suggesting that people could infiltrate the weekend protests and “wreak havoc downtown” but he expressed optimism that things would remain peaceful.

Police Chief Mark Saunders also commented on the planned protests during a news conference on Thursday. He said that officers will “have the resources to police what we need to police” but he said that the hope is that things will remain peaceful.

Saunders did not provide specific details about the precautions that police were taking, saying that it would be “foolish” to provide operational details.

“Every protest we have had to date has been peaceful so I am not going to speculate on what their intentions are,” he said. “I can tell you that through my frontline officers the vast majority of people that have gone to protests in the City of Toronto have been peaceful. There is a lot of passion, there is a lot of anger and there is a lot of hope and I hope that as Torontonians we continue to do that.” 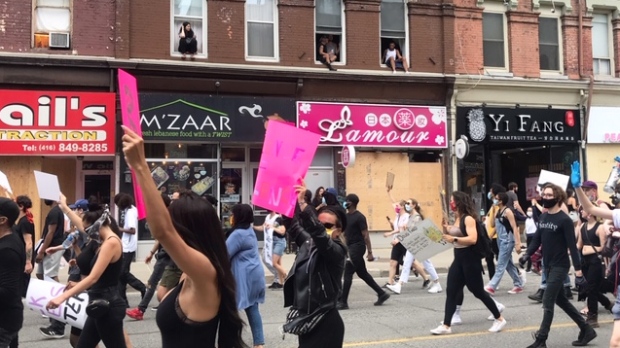 On Friday, Tory told CP24 that a protest held last weekend along Bloor Street West attended by an estimated 4,000 people was “a great reaffirmation of how we do things in Toronto” and that he hopes this weekend’s demonstrations will follow the same pattern.

“Anti-black racism is an issue in our city that we have to address and deal with and these protests, if they are peaceful, are helpful to making sure we raise the profile of that issue,” he said. 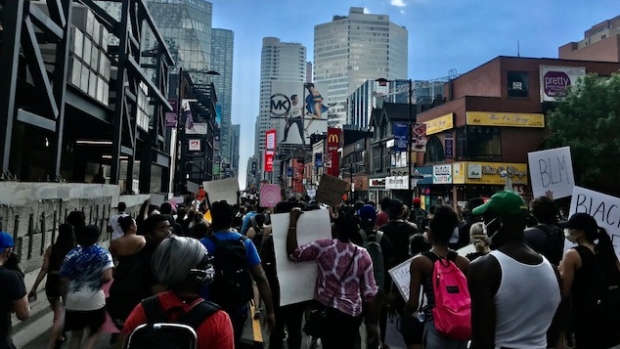