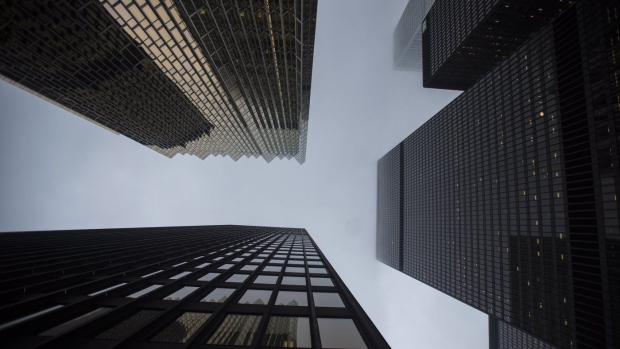 Bank buildings are photographed in Toronto's financial district on June 27, 2018. As inflation tops eight per cent, anyone with money in the bank is seeing their savings drip away at the fastest rate on record because deposit interest rates, still largely languishing at around one per cent, haven’t kept up. THE CANADIAN PRESS/Tijana Martin

TORONTO - The savings accounts of Canadians have sprung a leak.

As inflation tops eight per cent, anyone with money in the bank is seeing their savings drip away at the fastest rate on record because interest rates for savings accounts, still largely languishing at around one per cent, haven't kept up.

“They will lose money. The value of their savings is decreasing,” said Claire Celerier, an associate professor of finance at the University of Toronto's Rotman School of Management.

There are several reasons for the lag, but part of the problem is the concentration of Canada's banking sector, said Celerier.

“When there is lower competition between banks, then it takes more time for them to adjust rates on deposit accounts.”

Banks simply don't have much incentive to change rates unless they have to, she said.

“When banks don't increase rates on deposits they're making more profits ... It's a very easy way to make profits, to have a low rate on deposit accounts.”

Part of what boosted rates in the early 1980s was the introduction of money market mutual funds, providing a competitive alternative to bank accounts for average savers.

Canadians however don't tend to switch banks very often. An Accenture survey from 2020 found that fewer than four per cent of consumers said they had switched their primary bank account in the last year.

Some banks have also started to increase rates, though often via short-term promotions and other restrictions, and it's not across the board.

“Banks are very quick to pass on the higher interest rates on the borrowing side but are much slower to do so for those that are seeking to save,” said Macmillan.

“As more Canadians are getting more comfortable shopping around or moving to a bank that they might not recognize as much, kind of the big five, big six banks will start to feel that competitive pressure, and increasingly start to change their rates accordingly.”

Part of the challenge though is that banks are not so desperate for deposits after Canadians have seen savings swell during the pandemic.

“So there's less pressure to increase the deposit rate, unless deposits start reducing dramatically or a competitor raises rates.”

De Souza noted that credit unions offer higher rates in part because they're designed to serve members, and not just make a profit for shareholders like banks, but that there is still some hesitation among consumers.

“Certain individuals may not want to put money with credit unions because they perceive them to be riskier than large banks, despite the higher rates that those credit unions pay.”

Many credit unions, however, also haven't raised rates much. Vancity is still offering 0.75 per cent interest on its main accounts since it also doesn't have a strong need for more deposits, said chief financial officer Clayton Buckingham.

“Really how we're setting rates is looking at overall funding needs for the organization.”

Higher customer deposits have helped meet the higher loan demand and buffered the credit union's need for more funds, but that could change if the market shifts more, said Buckingham.

“It comes down to the competitive market. That's driving the majority of movement, so if rates are going upat the rest of the banks and credit unions out there, then we need to follow suit.”

He said customers are instead gravitating to Vancity's term deposits, which is similar to a guaranteed investment certificate. The products, which are linked more closely to bond rates, have climbed much faster than deposit rates, with some institutions offering rates above five per cent for longer term commitments.

Buckingham noted that it's also still early days for inflation in general with tremendous uncertainty ahead, so financial institutions are proceeding cautiously. If deposits keep tracking down as people dip into their savings to cover increasing costs then financial institutions may have to raise rates to attract deposits, but if loan demand drops over economic worries then lenders might not need as much capital on hand.

“We're seeing just a starting impact of what may happen in the high inflationary environment ... for now it's still everybody figuring this out.”