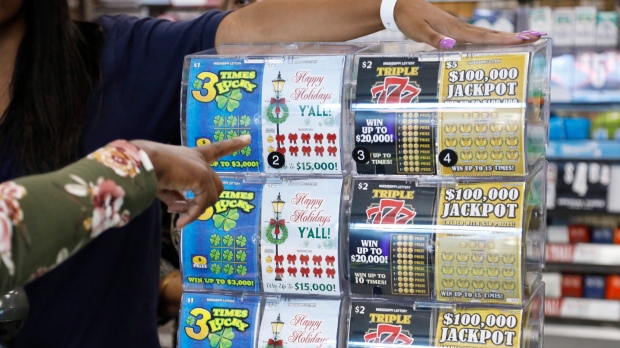 A customer points to the scratch-off ticket she wants to purchase from at a Jackson, Miss., convenience store, Monday, Nov. 25, 2019. (AP Photo/Rogelio V. Solis)

A man is facing several charges after allegedly robbing a convenience store in Scarborough ̶ one day after being arrested and charged for the exact same thing.

Toronto police say that on April 13, a man entered a convenience store in the area of Progress Avenue and Markham Road, allegedly brandishing a broken beer bottle.

Investigators allege the man threatened an employee behind the counter and demanded cash.

The suspect grabbed some lottery tickets and then fled the scene.

Police got to the scene and found the suspect a short distance away, allegedly still in possession of the lottery tickets.

He was arrested and charged, and appeared in court on April 14 at 1911 Eglinton Avenue East.

He was released on a promise to appear.

That same day, police said they were called to another convenience store at Ellesmere and Markham roads.

Investigators allege a man walked behind the counter of the store, told an employee he had a gun, and demanded cash.

He made off with cigarettes and lottery tickets.

“Hold Up Squad investigators were able to identify the man, and on Friday, April 17, 2020, they located the man and rearrested him,” police said Tuesday.

He was identified as 55-year-old Andrew David Delaney, of no fixed address.

Delaney was charged with robbery with an offensive weapon, robbery with violence and failure to comply with a release order.