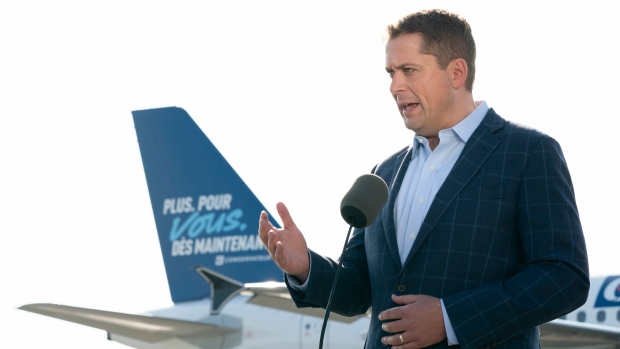 OTTAWA -- It was a hot August day in 2003 when Conservative campaign manager Hamish Marshall first learned not to underestimate Andrew Scheer.

It was Scheer's wedding day and Marshall was a guest, sitting at a table with a few well-to-do Regina businessmen, when talk about Scheer's future began.

At the time, the 24-year-old Scheer had recently moved to Saskatchewan and was working at an insurance company, waiting tables on the side.

During one of the wedding speeches, someone mentioned young Scheer had ambitions to run for public office -- which caused the businessmen to emit a few quiet chortles.

"Oh, well isn't that cute," Marshall recalls them saying to one another.

Nine months later, Scheer was elected a member of Parliament, first beating a player for the popular Saskatchewan Roughriders for the Conservative nomination, then winning the Regina-Qu'Appelle riding from NDP MP Lorne Nystrom, the longest-serving member in the House of Commons at the time.

It's a pattern of miscalculation that Marshall says has been a common theme for Scheer since entering politics.

"There's this long history of people underestimating Andrew and him overcoming the expectations," Marshall said in an interview with The Canadian Press.

Scheer, 40, is now the leader of the Conservative Party of Canada and is in a race with a much higher office at the finish line.

And although his Conservative party was soundly defeated four years ago under the leadership of Stephen Harper, who had become deeply unpopular in many regions of the country, Scheer and his team believe they have a real chance at victory.

Caucus members and party insiders say Scheer's thoughtful and measured approach, his ability to build consensus among his team and his more humble beginnings make him the perfect foil to Liberal Leader Justin Trudeau on the campaign trail. Trudeau was born when his father Pierre was prime minister, grew up in material comfort, and has been something of a celebrity his whole life.

Scheer's more down-to-earth beginnings have become a key talking point for his team and for Scheer himself, especially as he criss-crossed the country in the weeks leading up to the election campaign's official start.

During a speech in Cape Breton in August, Scheer told supporters about his vision for a "new Conservative government" that would create a country in which "a kid who grew up in a townhouse in a family who didn't own a car, whose grandparents lived in a two-room house with nine children on a dirt road in rural, now suburban, Toronto -- can stand in a room like this, running to be the next prime minister of Canada."

Barely glancing at his prepared remarks, Scheer appeared jovial and at ease at the podium in Cape Breton -- a polish that Marshall admits has taken time to achieve as the father of five evolved from being a young MP to a party leader.

Born in Ottawa to a nurse and a newspaper librarian, Scheer finished his undergraduate degree in Saskatchewan and then ran for Parliament there in 2004.

He spoke too quickly back then, recalls Conservative Sen. Denise Batters with a laugh. Her late husband Dave Batters, also from Saskatchewan, was also a rookie member of Parliament with Scheer in 2004.

When she first heard Scheer was challenging the NDP's Nystrom for the seat in Regina-Qu'Appelle, Batters says she was among those who didn't believe he could beat the veteran MP.

The same thing happened when Scheer sought -- and won -- the speakership of the House of Commons in 2011. At 32, he became the youngest person in the chamber's history to hold the title.

"A lot of people said, 'Are you kidding? We're never going to have a speaker that young,"' says Carleton MP Pierre Poilievre, who was also was elected to Parliament at the same time as Scheer.

"I think they'd underestimated how many relationships he had built across party lines, how much respect he had earned as a hard worker and a thoughtful parliamentarian."

Batters says Scheer and his team used a similar approach in 2017 when he ran to become leader of the Conservative party as he did when he ran for Speaker: appealing to Tories as a "solid second choice" in the ranked-ballot vote.

It worked. He trailed from the first ballot but eked out a win on the 13th against the frontrunner, Quebec MP Maxime Bernier. He became the second leader ever of the modern Conservative Party of Canada, following the 2003 merger of the Canadian Alliance and Progressive Conservatives.

Since then, he has used his steady, quiet approach to keep the party from churning into a mess of internal squabbles -- an achievement party insiders are quick to highlight, in light of the party's history of splintering after electoral defeats.

They don't count Bernier's dramatic departure last year. He quit the party, calling it "morally corrupt" under Scheer's leadership, and started his own, libertarian political party that some believe could split the right in some key battleground ridings.

Scheer's boosters note that Bernier did not entice any other Conservative MPs or senators to follow him, "and nobody was tempted," Marshall insists.

"He (Bernier) had six or seven caucus members supporting him in the leadership and none of them were even vaguely tempted to go that way."

Now, with a number of polls suggesting the Conservatives are in a virtual dead heat with the Liberals as voting day draws near, Scheer's campaign manager and members of his team say they believe Scheer's many unexpected past victories give them plenty of reason to believe he can lead the Conservatives to electoral success on Oct. 21.

Marshall admits the party's chances look a lot better than some may have anticipated after its defeat just four years ago, or when Scheer took over. Marshall rejects any notion that Scheer was ever out to be a caretaker leader, quietly rebuilding the party and preparing it for someone else to take to power -- Scheer has always been in it to win.

"That's always been his goal, but I think other people can see that there's a path forward," Marshall says.

Now, the focus is on remaining disciplined and staying on message -- using Scheer's middle-class roots to sell him to Canadians as the opposite of Trudeau.

"We've got a prime minister who's a showhorse, a sort of celebrity who plays the role of prime minister. He's world-famous and comes from a world-renowned political family dynasty. And he's running against this working-class kid from suburban Ottawa, " Poilievre says.

"I think a lot of people miscalculate and underestimate Scheer's ability to connect with real people, even though he's not a superstar with the political establishment."

Batters echoes these sentiments, describing Scheer as the "perfect foil to Justin Trudeau," and "the kind of person you would want to have a beer with in your backyard."

Recalling his first speech to the Conservative caucus after winning the leadership, Batters says she was struck by the quote he chose to recite from John Diefenbaker, in which the former prime minister (and Ontario-to-Saskatchewan migrant) unapologetically declared he was "criticized for being too much concerned with the average Canadians. I can't help that; I am one of them."

"That is Andrew, too, and I was really glad he used that because I thought it was very telling of what his leadership would be," Batters said.

"He lives and understands middle class Canadians. He doesn't just talk middle class. And that's partly because of his upbringing."