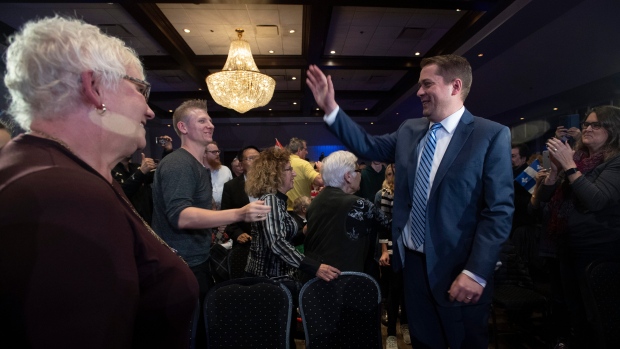 SAINT JEROME, Que. -- Conservative Leader Andrew Scheer says he will add fines of up to $20,000 for politicians who break Canada's ethics laws.

Scheer is in southern Ontario this afternoon, campaigning in NDP- and Liberal-held ridings, and is trying to turn attention back to the ethics of Liberal Leader Justin Trudeau.

Trudeau was found to have violated the Conflict of Interest Act twice over the last four years, the first for accepting a free family vacation at the private Bahamian Island of the Aga Khan, and the second for trying to influence his former attorney general, Jody Wilson-Raybould, to overrule a decision by the public prosecutor not to offer a deal to SNC-Lavalin.

The Quebec engineering giant is accused of fraud and bribery related to some of its overseas operations.

In neither case did the act provide for any sanction against Trudeau beyond the public embarrassment of the findings.

That is often the case with the Conflict of Interest Act, which allows for a fine of up to $500, but only if public office holders fail to report conflicts of interest within a specific period of time.

Liberal Bill Morneau, Trudeau's minister of finance, was fined $200 for failing to disclose to the ethics commissioner the existence of a property he owns in France.

Other violations under the act, including those Trudeau was cited for, carry no such penalty.

Scheer intends to introduce fines of up to $20,000, with the exact amount proportional to the severity of the violation, to be applied for conflicts of interest, giving preferential treatment, using insider information or influence, accepting gifts and other violations.

He is also intent on strengthening the restrictions on lobbying, reforming laws for whistleblowers and closing what he says is a "loophole" in the Conflict of Interest Act that allows for a cabinet minister to hold indirect shares in private companies.

As Scheer is appearing in the southern part of the province, his provincial counterpart, Progressive Conservative Premier Doug Ford, is slated to have his own events in the northern region.

Ford has kept a very low profile during the election campaign -- his event Wednesday is the first time in weeks he will take reporters' questions.

The Liberals have repeatedly invoked his name in their attacks on Scheer, accusing the federal leader of wanting to carry out a similar agenda that would result in service cuts.

Scheer has denied that's the case.

Earlier Wednesday, Scheer wrapped up what's likely his final visit to Quebec this election campaign by stopping by a Montreal-area Tim Hortons with one of his star candidates in the province.

That Scheer and his wife Jill would appear at a branch of the beloved national coffee chain topped off Scheer's efforts to double-double down on his plan to win a majority government by selling a fervently nationalist message in Quebec, promising to respect and enhance its place in the federation.

He was in a Bloc Quebecois riding, Riviere-du-Nord, currently held by Rheal Fortin, who was at the heart of political chaos for the party after the 2015 election, including briefly leaving the party in a dispute with the party's last leader.

He's now back in the fold, but the Conservatives are hoping to capitalize on the uncertainty by running a star candidate in the riding: former Olympic champion Sylvie Frechette.

She attracted her own share of controversy at the start of the campaign. She was among the Quebec candidates who were saying publicly that a Conservative government wouldn't allow backbench members to bring forward motions or legislation seeking to curtail access to abortion.

While Scheer has said he'd personally oppose the idea, he has not said he'd forbid his members of Parliament from trying.

The confusion saw abortion rights suddenly become a question Scheer could not avoid, as his party, the public and the media sought clarity for days on both the leader's personal position and how he'd handle it in government.

It would take until after the first French-language debate -- which saw Scheer get pummelled by his opponents for obfuscating his position -- for Scheer to be clear: he is personally opposed to abortion, but would not back any effort to re-open the debate.

Outside a Tim Hortons in a Montreal suburb Wednesday, Frechette chalked the whole thing up to a misunderstanding, and said Scheer had always been clear about where he stood.

"For me, it's just very sad that we wasted so much energy on something that was already covered and was clear," she said.

This report by The Canadian Press was first published on Oct. 16, 2019.