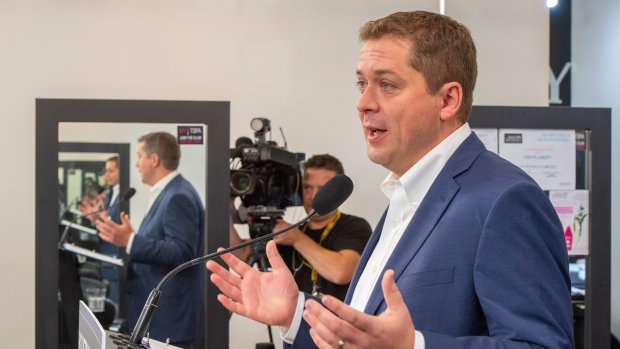 Federal Conservative leader Andrew Scheer speaks at a campaign event in Winnipeg on Tuesday September 17, 2019. Scheer says he would help parents save up to send their children to college or university by increasing the amount of money the federal government contributes to the pot. THE CANADIAN PRESS/Frank Gunn

OTTAWA -- Andrew Scheer is making no apologies for insisting that a re-elected Liberal government would impose a capital-gains tax of up to 50 per cent on Canadians who sell their homes -- a notion the Liberals say they never considered.

The Liberals have flatly denied any intention to do anything of the kind but the Conservative leader says that doesn't mean they won't.

"Let's keep in mind that just because Justin Trudeau says he'll do something, that doesn't mean he'll do it. You can't trust him," Scheer said Monday during a campaign stop near Kelowna, B.C.

The Conservatives have seized on a "policy proposal" report written last November by Toronto Liberal MP Adam Vaughan for the Ontario Liberal caucus.

In that report, which canvasses ideas that could be included in the 2019 campaign platform for tackling sky-high housing prices, Vaughan mentioned an idea "that has emerged from housing townhalls" as a way to "hit speculators who quickly flip houses in hot markets." The idea was to impose tax on the profits from selling principal residences of 50 per cent if a house were sold after just one year of ownership, 25 per cent after two years, 15 per cent after three years, 10 per cent after four years and five per cent after five years.

Vaughan, who had conducted townhalls across the country, said he was only reporting back what he'd heard and that the capital-gains tax idea was never endorsed by him or the caucus, much less included in the Liberal platform.

"There is no truth to any one of the allegations that the Conservatives make. It's just a complete, total fallacy."

Scheer sent an Aug. 26 letter on his parliamentary letterhead warning about the "alarming proposal that has leaked from inside Justin Trudeau's government, one that would hurt homeowners and make life less affordable for families across Canada."

The letter, which the Conservative party says was sent to "a wide variety of stakeholders" in the housing industry, goes on to say: "This is extraordinarily bad policy that will hurt Canadian families ... This new tax will affect people who move for a new job, people who buy a home because they need a place to live right away but are hoping to find a larger permanent residence, people who have a sudden change in family status because of marriage, divorce or children. There are many reasons for someone to buy a house and sell it in less than five years and they shouldn't be punished for it."

Scheer's letter concludes by promising to make sure "this Liberal tax never sees the light of day."

The Conservative party has tweeted about the "secret plan to tax the sale of your home at 50 per cent," maintaining it's part of "Trudeau's hidden agenda" to hike taxes to pay for his "massive deficits."

Scheer showed no inclination to pull back when asked Monday if his party would stop spreading the story since it has been categorically denied.

"This idea was put forward by a hand-picked Liberal member of Parliament, someone who's very close to Justin Trudeau and these are the types of ideas that Justin Trudeau will need to implement after the election, when he doesn't need your vote but he still needs your money," Scheer said.

"When he says he's not going to do something, people just can't trust him. He said he wouldn't raise taxes on the middle class, he did. He said he would balance the budget in 2019. He didn't. He said Jody Wilson-Raybould never came to him with her concerns. Turns out, she did."

Scheer also suggested the Liberals have indulged in the same sort of tactic, continuing to warn that a Conservative government would cut funding for health care and education to balance the budget, despite Scheer's insistence that he wouldn't.

"Justin Trudeau is running around spreading fear and misinformation about our campaign ... So if they are passing around policy papers and putting forward ideas that give a glimpse into the mindset of a government that is desperate for new revenues because they're running these massive deficits, I think Canadians have a right to know that this is the type of thing that's being contemplated."

On Tuesday, the party issued a press release saying the "wheels are already in motion" to impose the tax and warning Canadians that Trudeau "is coming for your wallet."