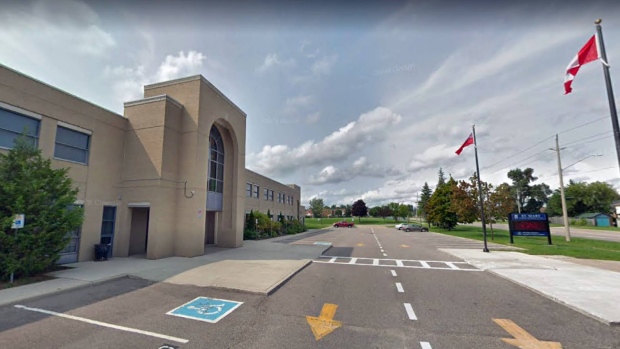 A Pickering Catholic school has launched an investigation after “hurtful and racist” comments were published next to a student’s yearbook photo.

In a letter to students and staff on Sunday, St. Mary Catholic Secondary School Principal Susan Duane said they were horrified to discover the comments in the 2019-2020 yearbook.

“These comments were malicious, hurtful and racist in nature. These comments are not a reflection of our mission, vision or values as a Catholic learning environment,” Duane said.

“We sincerely apologize to the school community for the offensive, hurtful and unacceptable nature of these comments.”

The letter was released one day after the aunt of a student at the school posted to social media about a racial slur printed beside a photograph of her nephew.

According to the Facebook post, the original yearbook entry was about her nephew honouring his late grandmother for “guiding me through my four years of high school.”

Instead, what was published under his name has “forever ruined” his memory of his time at the school, his aunt Mayma Raphael said in her post.

A racist phrase referencing a gorilla that got shot at a Cincinnati zoo was printed next to her nephew’s graduation photo. 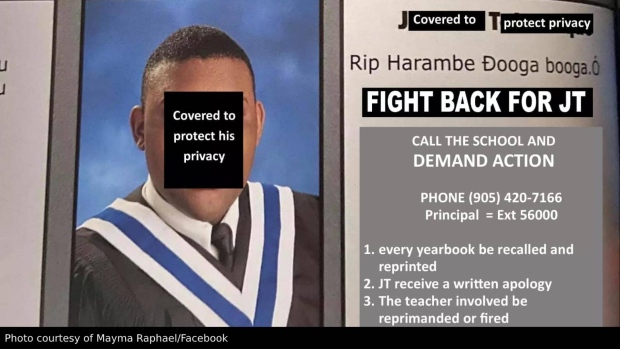 Raphael noted that her nephew had been called a monkey and was bullied by some of the students.

She said she “never thought that they would have taken it this far.”

Her nephew is devastated, embarrassed, hurt, and disappointed, Raphael said.

“This cruel act echoes the many incidences of racism that many Black Canadian kids experience throughout their time in the education system,” the post reads.

“The school needs to take action to get this situation fixed. Our kids are suffering way too much.”

For their part, the principal said the school, in collaboration with Durham police, will be looking into the incident to ensure those responsible are held accountable.

Duane noted that the individuals who produced the yearbook will be subject to disciplinary action.

The school held a diploma/yearbook/awards drive-thru pickup on Saturday.

Students are now being asked to return their yearbooks to the school on Tuesday. Duane said a full inventory will be completed to ensure that every copy is accounted for.

“Further direction will be provided in the coming days/weeks, and we ask for 100 per cent cooperation from all students, parents/guardians and staff,” she said.