Police continue to search for two suspects following a shooting that left a male dead in Midtown Tuesday afternoon.

It happened behind a building on Yonge Street at Soudan Avenue, just south of Eglinton Avenue, shortly before 3 p.m.

The victim was shot while sitting in the driver’s seat of a sport utility vehicle. He was pronounced dead at the scene, paramedics said. Information on his age has not been provided.

Aerial shots of the scene captured by the CP24 helicopter showed the white vehicle covered with an orange tarp.

Preliminary information provided by police said there had been multiple reports of a male shot in an alleyway in the area.

A statement sent to building residents at 2181 Yonge St. obtained by CP24 said the shooting occurred in the drop off area by Cowbell Lane.

“The courtyard area has been cordoned off by police and the shooting is being investigated,” property manager Paul Kotecha said Tuesday afternoon.

In a subsequent statement Tuesday night, building residents were told that the shooting was not random.

“I also understanding that this shooting was a targeted attack,” condominium board president Shawn Pulver said. The statement did not disclose who provided this information.

Police would not confirm that the shooting was targeted when contacted by CP24 Tuesday night.

“I think it’s a little early to describe what the motive might have been in this shooting,” Toronto police Const. David Hopkinson said earlier in the day.

“We’ll have to wait for our investigators to get on scene and do some investigation before they’re able to say, one way or another, whether this was targeted, or some kind of random violent act.”

The suspects should be considered armed and dangerous.

Speaking with CP24 by phone Tuesday afternoon, the president of the Toronto Police Association said something had to be done to stem the rise in gun-related violence in the city.

“The guns are so prolific, it really speaks to the degree of this problem, and that it’s not an isolated incident or an isolated group of people – this is happening in public areas, it’s happening all across the city, and everybody in this city should be concerned about it.

“This is out of control.”

“For us, this is a big surprise, for this area, especially at this time of day,” Toronto police Supt. Reuben Stroble said during a media update on the investigation Tuesday afternoon.

Officers continue to canvass the area for potential witnesses, he said. Police are also looking at whether security cameras in the area may have captured anything that may be of assistance to investigators.

Stroble encouraged anyone involved with the shooting to contact their lawyer and turn themselves in.

“We will find out who you are, and you will be arrested.” 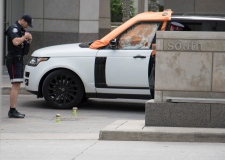 Police officers can be seen examining a sport utility vehicle after a man was fatally shot behind a building on Yonge Street on Tuesday, June 7, 2016. (Evangelo Sipsas)

A white vehicle is seen covered with an orange tarp following a fatal shooting behind a building on Yonge Street on Tuesday, June 7, 2016. (CP24/Jackie Crandles)

Police tape is seen following a fatal shooting in the Yonge Street and Soudan Avenue area on Tuesday, June 7, 2016.