Second round of NAFTA talks today in Mexico 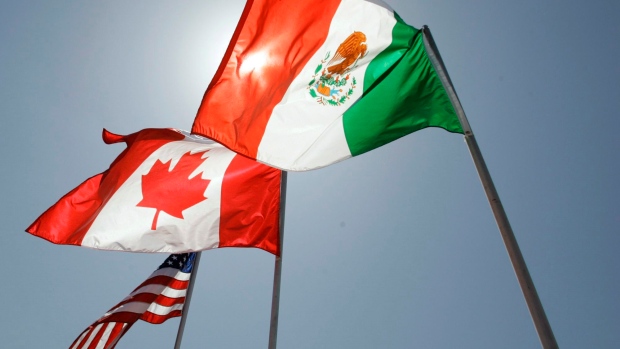 In this April 21, 2008 file photo, national flags of the United States, Canada, and Mexico fly in the breeze in New Orleans. Chrystia Freeland will give a speech Monday arguing that NAFTA's upcoming renegotiation will benefit a broad cross section of Canadians. THE CANADIAN PRESS/AP/Judi Bottoni

OTTAWA - The second round of negotiations for a new North American Free Trade Agreement kick off today in Mexico.

The NAFTA talks came up briefly yesterday during a phone conversation between Prime Minister Trudeau and U.S. President Trump.

The two leaders talked about their hopes to work out a revamped NAFTA by the end of the year.

However, at the end of the first round of negotiations last month, negotiators for the three countries issued a joint statement suggesting major issues must be dealt with.

Ottawa trade consultant Adam Taylor, an aide to former Conservative trade minister Ed Fast, says Mexico and the U.S. want a speedy end to the talks rather than Canada.

He points out that both countries have major elections in 2018 and want NAFTA issues put to bed before then.

Canada has also announced the creation of a 10 person NAFTA environmental advisory council in order to strengthen environmental protection within the new deal.