Second wave killing fewer Canadians but it is no reason to let down guard, doctors warn 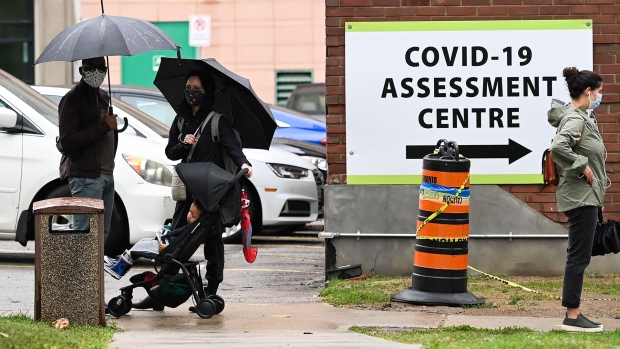 People line up to be tested for COVID-19 at a testing centre in Toronto on Sunday, Sept. 13, 2020. THE CANADIAN PRESS/Nathan Denette

OTTAWA -- Seven months into the pandemic, medical experts have a better idea of how to treat COVID-19 and how to keep it out of high-risk settings which means there are far fewer people dying of the virus now than there were in the spring.

But doctors and politicians are frantically warning that if the case numbers in Canada keep soaring as they have been in recent weeks, that may not be the case for much longer.

Dr. Matthew Oughton, an infectious disease specialist at Jewish General Hospital in Montreal, says the second wave of the pandemic in Canada is largely being spread among younger, healthier populations than it was in the spring, when long-term care homes were hit hardest.

In Ontario, at the end of April, 45 per cent of all cases were being diagnosed in people over the age of 60, while people under 40 accounted for less than 25 per cent.

When you couple that with the expanded knowledge about how to treat this virus, it means more people are able to ride out the disease out of hospital, and fewer people are dying.

But Oughton says that low-risk is not no risk and that, as numbers soar even in younger populations, the number of people who will get very sick and die will also start to go up.

He also says the other risk is that the more the virus spreads in the community, the harder it will be to keep it out of seniors' residences, and long-term care homes where the impact can be devastating.

"What's going to happen almost inevitably, as you have more and more spread in the community, it's going to find more vulnerable groups to spread to," he said.

Health Minister Patty Hajdu said Friday the knowledge learned in the first wave about treatments and public health protections is helping in the second wave, as has the more reliable supply of personal protective equipment.

But none of that is going to help if hospitals fill up to capacity because the system can only be stretched so far.

"At the end of the day, we still can't see these rises in cases increase exponentially," said Hajdu.

The average daily cases nationally went from the low 400s at the end of August, to more than 1,700 on Friday, with Ontario and Quebec accounting for more than 80 per cent of them.

While hospitalizations are still far below what they were seven months ago, they are growing. In Ontario and Quebec. The number of COVID-19 patients in hospitals has tripled, and the number in intensive care more than doubled.

Officials with Ottawa Public Health, which recorded its single highest daily total of 142 cases of COVID-19 on Friday, are pleading with people to only have close contact with people they live with.

"Our health care system is in crisis," the agency tweeted, noting labs are beyond capacity, contact tracing is behind, hospitals are nearing capacity and more long-term care homes have outbreaks.

"Our system can't handle much more of this," it said.

Chief Public Health Officer Dr. Theresa Tam said the expanded knowledge of the virus and what public health measures are working, will allow governments to be more specific when they impose measures to try and slow the spread. Quebec, for example, is targeting new restrictions on public activities to hotly affected cities like Montreal and Quebec, and leaving much of the province as before.

Ontario put new restrictions Friday on restaurants, banquet halls and gyms only in Toronto, Ottawa and Peel region, where the majority of that province's cases are being tallied.

Hajdu said there is no easy guideline for governments to follow when new restrictions have to be imposed but, if Canadians want to avoid full lockdowns, it's critical that they make good decisions about socialization.

"This is a fine-tuned balance between making sure we can have some semblance of a normal economy and a normal life and also protect our health care system and the health of Canadians," she said. "We are continuously working at that"

Oughton says there is another nasty outcome coming if we can't get this second wave under control. People who aren't dying of COVID-19 are still going to be getting cancer and having heart attacks and getting into accidents. If the health care system is overloaded with COVID-19 patients, it will lead to a higher mortality rate in other serious illnesses as well.