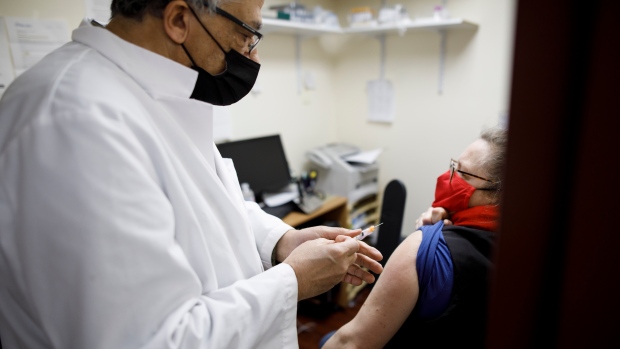 Pharmacist Abraam Rafael prepares to administer a COVID-19 vaccine to Sam Dajostino at his pharmacy in Toronto, Sunday, March 14, 2021 as Ontario starts administering the AstraZeneca vaccine for COVID-19 to residents aged 60-64. THE CANADIAN PRESS/Cole Burston

Select Ontario pharmacies could soon begin administering the Pfizer vaccine amid delivery delays that are likely to result in the supply of AstraZeneca running dry within days.

The Ford government has said that two shipments of AstraZeneca with nearly 600,000 doses may be delayed until the end of May, a snag that could affect the administration of vaccines at more than 1,400 pharmacies.

In an interview with CTV News Channel over the weekend, Ontario Pharmacists Association CEO Justin Bates said that talks have been underway with the Ontario government about allowing pharmacies to administer the Pfizer vaccine and it now seems likely that a pilot project could be launched as soon as this week “with a limited number of pharmacies.”

He said that administering the Pfizer vaccine will provide some logistical challenges for pharmacies due to its ultra cold storage requirements but expressed confidence that those can be overcome.

“It is more complex, it requires lots of planning but I guess I can say that we can do this because we have done it in several provinces already and the U.S. has enabled pharmacies to do both Pfizer and Moderna since the beginning of the vaccination program,” he said. “We are ready and we have a playbook that deals with all the operational elements and the difference between the three vaccines that are approved for use in Canada.”

The Ford government recently expanded the list of those eligible to receive the AstraZeneca vaccine in pharmacies to include Ontarians 40 and up.

The move has resulted in a surge in demand at pharmacies but it also comes amid supply challenges and Bates said that he expects all pharmacies to be out of stock of the vaccine by “mid to late next week.”

He said that by allowing pharmacies to administer the Pfizer vaccine, we may be able to avoid an interruption in the administration of vaccines at pharmacies.

“The goal for everyone here is to get more shots in arms and mobilize quickly. We are a complimentary channel to the public health mass immunization clinics and primary care and we need to get this into the community through pop up clinics as well as allowing for more essential workers to come into pharmacies and we can’t do that with a single vaccine in the channel,” he said. “Pfizer is going to be a very important part of rolling this out successfully.”

Bates said that the goal is to begin a pilot project with select pharmacies administering the Pfizer vaccine this week and to then “roll it out more broadly” within two weeks.

At this point it remains unclear who would be eligible to receive the Pfizer vaccine in pharmacies as part of the pilot project.

Currently, Toronto residents between 40 and 60 are only eligible to receive the AstraZeneca vaccine unless they fall within other priority groups or live in a hot spot neighbourhood.