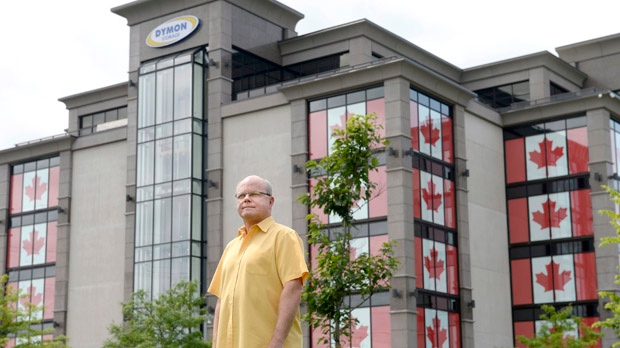 Stephen Creighton, Senior Vice President of Dymon Group of Companies, stands at the company's Carling Avenue self storage facility in Ottawa on Thursday, Aug. 3, 2017. Boardrooms, a wine-storage centre, an on-site sommelier, a lounge, those are just some of the perks an Ottawa-based company is promising as it builds a massive self-storage facility in Toronto. THE CANADIAN PRESS/Justin Tang

TORONTO -- Boardrooms, a wine-storage centre, an on-site sommelier, a lounge -- those are just some of the perks an Ottawa-based company is promising as it builds a massive self-storage facility in Toronto.

The sprawling site being constructed by Dymon Group of Companies won't be ready until next year but it highlights a shift in the self-storage industry, where some companies are moving from only offering lockers for people to stash their goods to providing multi-functional spaces that come with a host of add-ons.

Dymon, which currently has eight facilities, claims it controls 80 per cent of Ottawa's self-storage market. Creighton notes that the locations, which have about 10,000 lockers between them, are 99 per cent occupied.

The company is now expanding to the Greater Toronto Area, where it plans to build 80 new sites in the next 10 years.

Six sites will be ready by 2018 -- one of them, the first Toronto location, is set to become what the company claims will be the world's largest self-storage facility.

The facility will feature offices and third-party retailers in addition to 3,000 storage lockers. Customers will also be able to take advantage of a Dymon store selling moving supplies, a delivery service, mailboxes, security vaults and even on-site wine tastings.

"We have created the Ritz-Carlton of self-storage, but at an economic price," Creighton says.

Dymon's new humidity-controlled Toronto facility, on the other hand, will be opposite an Ikea.

Dymon's buildings are also "attractive," he notes, which is why people often mistake his Ottawa facilities for low-rise condos or high-end office buildings.

But James McKellar, a professor of real estate and infrastructure at the Schulich School of Business at York University, says the appearance of self-storage facilities do little to attract customers, noting that they consider convenience and price over a facility's facade.

The perks offered by companies like Dymon, however, may help draw customers in, he says.

"(Self-storage companies) will do anything to get your stuff in (their facilities)," he says. "They also know the chances of you taking it out aren't as great...it's out of sight, out of mind."

What remains to be seen, McKellar says, is whether what companies like Dymon are doing will be widely adopted by others in the sector.

"(The industry) will only head in that direction if all of this makes them more money," McKellar says. "The unknown part of this is 'will it bring customers?"'

Diana Murphy is already a fan of the perks she gets with her storage space at one of Dymon's Ottawa locations.

The 57-year-old runs a laser clinic, while her husband has a surgery practice in downtown Ottawa. For years, their bungalow's basement was filled to the ceiling with boxes of their medical files.

"I would have needed two exam rooms for the boxes," Murphy says. "That would have been insanity, cost-wise."

When Dymon introduced its file storage system in 2014, Murphy -- who has been a customer since 2009 -- says she got a locker for $254 a month that came equipped with steel shelves for boxes of her files. Dymon staff bar coded the boxes, allowing her to track her documents with the company's app.

"It's mind-blowing," Murphy says. "I type in a client's name and everything is exactly where the app says it is."

Murphy could also ask Dymon to deliver items right to her door as the company offers a pick-up and drop-off service, but she hasn't felt the need as her locker is a five-minute drive from her home.

In fact, Creighton says the majority of Dymon's clients live or work within three to five kilometres of their facilities.

"We move our facilities into the communities they support," he says. "(When) you are out doing errands on the weekend, you can stop in at your storage unit."

Some of Dymon's competitors are also approaching the business with a similar mindset.

Apple Self Storage, which is based in Aurora, Ont., has 30 sites in Canada. The family-owned business opened three new Ontario facilities in the last few months, with a fourth location next to Toronto's Yorkdale Mall set to begin construction in September.

David Allan, director of business development and acquisitions at Apple, says their urban locations tend to have more commercial clients.

"The users of self-storage are changing," Allan says, noting that 70 per cent of the clients at an Apple facility on the edge of downtown Toronto are businesses.

Justine Demsky is one of those clients.

On a summer day, she is busy pulling inventory out of storage. The 29-year-old has three lockers: one for furniture, one for accessories and one for art. It's all for her property staging company, which she started in 2012, the same time she turned to Apple.

"My products are safe. (Apple) has insurance if anything happens," says Demsky, who lives in the area.

At the same time, self-storage continues to appeal to residential clients.

Marie Mercurius, 48, got a locker at Apple for $149 a month when she moved in with a friend in 2015. There wasn't enough room for all her stuff in their apartment, but she knows she will need it in the future when she has her own place.

"The price was right," she says.

Whether it's individuals or businesses, Allan says self-storage allows them to better manage their costs. He also notes that the facilities create density and help businesses grow.

"The product that we build is not those drive-up sheds ... It's a functional space, it's brightly lit, it's professional," he says. "Self-storage has become a real product."