Seven people in hospital after fire breaks out at Mississauga home

Seven people are in hospital as a precaution after a fire broke out at a home in Mississauga Saturday morning.

Shortly before 7:30 a.m., fire crews responded to a blaze at a semi-detached house on Laddie Crescent, near Highway 427 and Derry Road East.

When fire crews arrived at the scene, they discovered heavy smoke billowing from the garage.

“They encountered smoke. Once they opened up the garage then they found the seat of the fire and they were able to quickly extinguish it,” Platoon Chief Steve Kraft from Mississauga Fire told CP24.

Twelve people were removed from the home, including eight adults and four children, Kraft said.

Seven of those residents were transported to hospital as a precaution for potential smoke inhalation.

“I believe it was three adults and four kids that were transported to the hospital. Luckily, they're all non-critical, so more cautionary than anything else,” Kraft said. 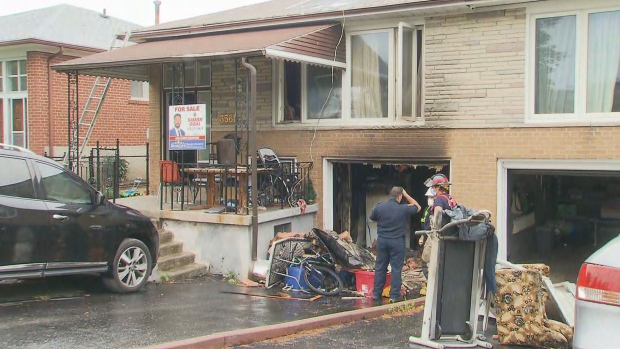 Kraft said it’s believed that a few families lived in the home.

Supreet Cheema lives in the adjoining house next door and said she was alerted by her dog about the fire.

She said she knocked on the doors to alert the residents about the blaze but no one answered.

“I'm just glad everyone was okay because there are little kids that live in the basement as well, and they didn't wake up until the firefighters got here which was terrifying,” she said.

Cheema said she believes there are 16 or 17 people that live in the residence and that not all of them were home at the time of the fire.

“Honestly, it was kind of a disaster waiting to happen. We've made complaints to the city already about how many people live in here, and nothing has ever come out of it,” she said.

In a statement to CP24, a spokesperson for the City of Mississauga said the property has a registered second unit and that the city has responded to complaints about the residence in the past.

Kraft said the residents will have to find other accommodations as the home is uninhabitable due to the extensive damage.

“Everybody in the home will be displaced. We're actually assisting them find a place to go. They're going to be displaced from the house so there is significant smoke damage.”

Kraft added that the damage is primarily in the basement but smoke damage is throughout the house.

Investigators are at the scene and are expected to be there for a couple of hours.

Seven people are in hospital after a fire broke out at a home in Mississauga Saturday morning.