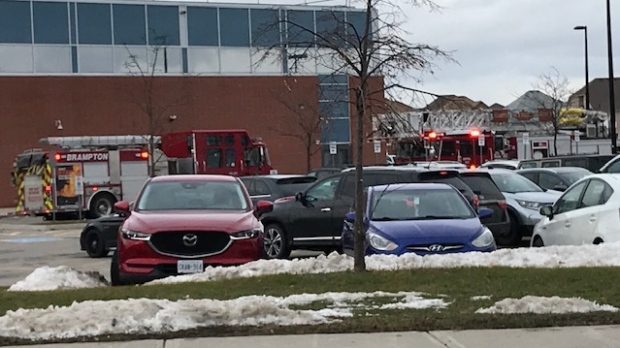 Fire trucks are shown outside Castlebrooke Secondary School after an unknown spray was released in the building's cafeteria. (Ron Dhaliwal)

A Brampton school was evacuated and seven students were transported to hospital as a precaution after an unknown spray was released in the building’s cafeteria on Tuesday afternoon.

The spray was released inside the cafeteria at Castlebrooke Secondary School at around 12:45 p.m.

Peel District School Board Spokesperson Carla Pereira tells CP24 that a number of students had adverse reactions to the spray, including one who fainted.

In a subsequent update posted to Twitter at around 2:50 p.m., Peel police said that the total number of students and staff affected was 18. They said symptoms included irritation of the eyes, nose and throat.

Pereira said that it remains unclear at this time who discharged the spray or what the substance was.

She said that firefighters helped to air out the building and ensure that the premises were safe before students were allowed back in.