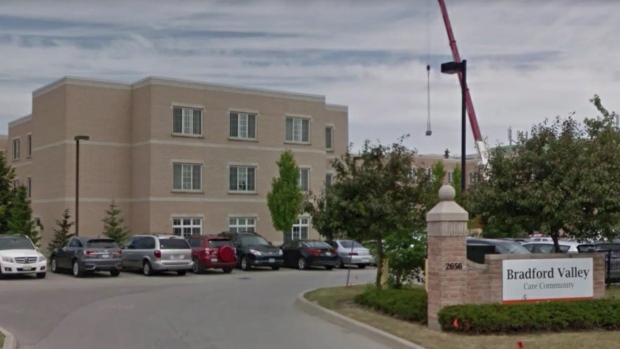 A seventh person infected with a highly-contagious coronavirus variant from the UK has been linked to a second long-term care home outbreak in the Simcoe-Muskoka public health region, officials said Sunday.

After confirming six cases of the B.1.1.7 coronavirus variant at Roberta Place long-term care home in Barrie, Ont. on Saturday, officials said Sunday that further genomic surveillance work revealed a seventh case of the variant in the area.

Dr. Charles Gardner says the infected person works at an unnamed retail outlet somewhere in Simcoe County. He would not disclose the exact nature of this person’s contact to those involved in the Bradford Valley outbreak, citing privacy concerns.

He said this seventh infected person had not travelled abroad.

The retail outlet, which offers curbside pickup only, has two other people associated to it who have tested positive for COVID-19.

Gardner said it was a “fortuitous finding” that led officials to discover this seventh case.

“(The lab that tested the sample) had a screen that had the possibility that it was as variant of concern and when that was triggered, it later turned out to be positive. The manner in which it was discovered was unlinked to our investigation at Roberta Place.”

He added that not all labs that test samples in Simcoe-Muskoka have the screen that can indicate the presence of the B.1.1.7 variant.

Standard PCR testing using samples collected from nasal swabs can detect a genetic deletion or signal that strongly suggests the presence of the B.1.1.7 variant.

The signal is then confirmed through the use of genomic sequencing, a lengthy lab process that takes at least 24 hours even when rushed.

Gardner said the happenstance nature of how the latest case was found reinforces the need for much more screening to be done across the province.

There have now been 21 confirmed cases of B.1.1.7 detected in Ontario, with federal and provincial labs now screening as many as 600 positive samples per week to find it.

“I believe that we need to grow the surveillance system the lab system, the expectations about testing at this time given that we're seeing more and more risk from this variant,” Gardner said.
We'd be better off if we had a more routine process for screening for such.”

Bradford Valley Care Community currently has six cases among its 230 residents and three among its 260 staff members.

All willing staff and residents of that home were given their first shot of the Pfizer-BioNTech COVID-19 vaccine on Jan. 15.

“Approximately 60 percent of team members and 96 percent of residents at Bradford Valley have received the first dose of the Pfizer vaccine,” Dr. Andrea Moser, senior medical officer of Sienna Senior Living, which owns and operates the home, said Sunday.

In the Roberta Place outbreak where six variant cases were found, virtually all residents of the home were infected and 40 have died so far.

Another person, an essential caregiver of a resident, has also succumbed to COVID-19 infection.

Including staff, outside care providers and close contacts of those people, the total size of the outbreak linked to Roberta Place has grown to 257 positive cases.

Six residents and one staff member are currently in hospital.

Gardner says he is “fully convinced” that all 257 infected in the Roberta Place outbreak have the B.1.1.7 variant.

Scientists in the UK and Denmark have found the new variant to be about 50 per cent more transmissible than “wild” variants that predominant in Ontario.

The UK variant can bind to human cells more easily than other variants, generate higher viral loads and may be more deadly in certain circumstances.

The discovery of B.1.1.7 and two other variants originating from South Africa and Brazil has prompted countries including Canada to require negative COVID-19 tests from incoming international air passengers.

Speaking about the discovery of the seventh B.1.1.7 case in Simcoe, Long-Term Care Minister Merrilee Fullerton said it highlights the need for more scrutiny of incoming travellers at airports.

“The situation at Roberta Place underscores the need for everyone to stay home to stop the spread of COVID-19 and help protect our long-term care homes, especially as we find more evidence of new variants in our communities,” she said Sunday. “It is also a stark reminder of the need for greater vigilance at our borders with incoming travellers.”

Gardner urged residents of Simcoe-Muskoka to behave as if the UK variant is circulating freely.

“It's important for people to take to heart the very real possibility that it's circulating in the community right now - if not from this cluster than from elsewhere.”