Several people were arrested after residents were forcibly removed from a longstanding encampment at a popular park in Toronto's west end Tuesday, resulting in clashes betwen activists and police.

This morning, security personnel hired by the city were at Trinity Bellwoods Park enforcing trespass notices issued by the city on June 12.

Toronto police were also on scene to "keep the peace." 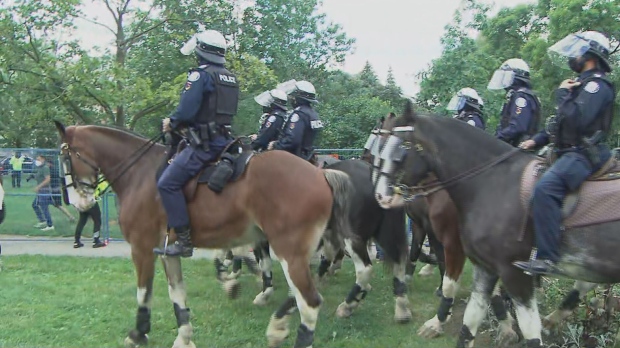 Many of the residents, however, chose not to vacate and protested by forming a chain by linking hands around structures in the encampment.

Tensions rose after the city put up fences around the park to "safely allow for cleaning."

Encampment advocates were seen pushing the fences down in protest.

Police said "several arrests" were made, including one protester who was taken into custody for allegedly assaulting a peace officer and another for assault with a weapon.

The clashes continued into the evening, some of them unfolding live on CP24.

Residents were told that they must vacate the park this morning and were given time to pack two bags of belongings. The city said all other personal items would be collected and stored for up to 30 days for future pickup.

“Camping in city parks is unsafe and it is not permitted, frankly, under city bylaws,” city spokesperson Brad Ross told CP24 Tuesday morning.

“Parks need to be accessible and safe, and available for all residents of the city, including people who are experiencing homelessness. The difference here is that they cannot set up tents and cabins.” 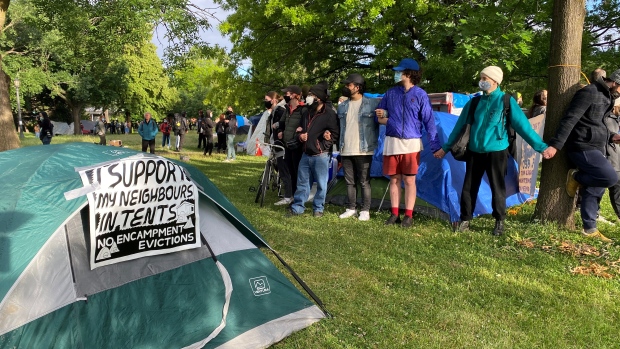 There are an estimated 20 to 25 people living in the encampment with approximately 65 structures at the park, according to the city.

“At some point, you know, when we issue a trespass notice we have to enforce it. And we have been engaging with people living in encampments continually,” Ross said.

“More than 20,000 times in fact since the start of the pandemic to encourage people to come inside where it is safer. And so today we are exercising the city's right, in fact the courts agreed last fall that the city can enforce its parks bylaw where camps aren’t permitted,” he said.

Interim Police Chief James Ramer told reporters Tuesday afternoon that some of those who demonstrated were just there “to interfere.”

“Those parks have been unable to be used by residents in the community so it's been something well known that the city was taking a position on to find suitable housing for our vulnerable people,” Ramer said. “A lot of the demonstrators that arrived, they come in the morning when they found out and they're there just to obstruct and interfere.”

Mayor John Tory said he supports the removal of the encampment.

"There does come a time when you have to move to make sure that those people are kept safe and kept healthy and that the parks are available for use by all of the people who those parks belong to, everybody in the City of Toronto," he said at a news conference Tuesday morning.

"I don’t make decisions about when laws are enforced in any regard in the city, those decisions are made by enforcement officials but I support what they’re doing."

The city is encouraging encampment residents to seek temporary shelter at city-run indoor spaces where they’ll have access to meals, harm reduction, physical and mental health supports and a housing worker. 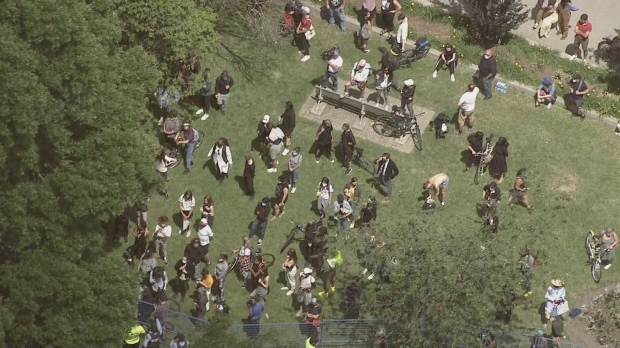 The city said there are more than 6,000 shelter spaces available in Toronto.

Ross said the goal is to get residents experiencing homelessness into affordable homes.

“We want to house people and having people come inside is the first step in ensuring that people can get safe, affordable housing,” he said.

An encampment resident who goes by the name Sue has lived at Trinity Bellwoods for 10 months and told CP24 that living in city-run shelters is not a safer option.

Lam adds that many residents would rather live in encampments instead of facing violence at shelters.

"Data has shown that shelter violence has increased in the last year so why would people want to go there? So there definitely will be people who won’t want to go and will stay in the parks. I’ve seen from personal experience that they’re threatened with arrest so the options are ‘do I go to jail or do I go to a congregate setting where I don’t feel safe?’"

As of Tuesday evening, 12 encampment residents at Trinity Bellwoods had agreed to move into city-run shelters.

The city has maintained that encampments are not a solution for homelessness as there could be serious health outcomes for individuals who live outdoors. 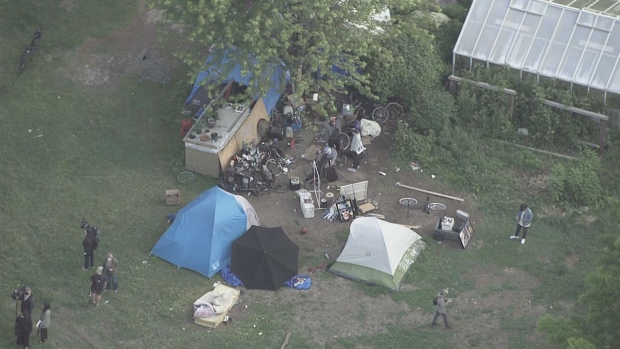 Since April 2020, nearly 1,700 people staying in encampments have been referred to indoor, city-run spaces.

Ross adds that the spread of COVID-19 is also a serious concern in encampments.

Many encampment residents have said that they prefer to live in their own outdoor space to avoid potentially contracting the virus at city-run shelters.

Last year, the city expanded its shelter system by adding hotel rooms for homeless individuals to access during the pandemic.

To date, the city has vaccinated more than 11,300 people experiencing homelessness and those who work in the shelter system.

Since 2010, seven people have died as a result of fires in encampments across the city.

The city said there are approximately 60 to 80 people and more than 200 structures at encampments across the city, including at Lamport Stadium, Trinity Bellwoods Park, Moss Park and Alexandra Park.

The city’s priority today is to clear out Trinity Bellwoods Park, but Ross said the city will continue to encourage encampment residents at other locations to seek shelter indoors.

“Our focus today is Trinity Bellwoods Park. We will continue to enforce parks bylaw and ensure first and foremost that people have the opportunity to come inside and be safe.”