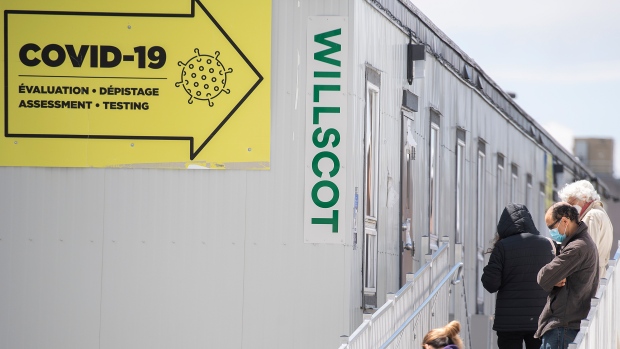 People wait to enter a COVID-19 testing clinic in Montreal, Sunday, May 9, 2021, as the COVID-19 pandemic continues in Canada and around the world. THE CANADIAN PRESS/Graham Hughes

While the overall number of new cases in Canada has been declining since mid-April, COVID-19 infection rates remain stubbornly high in parts of Canada.

In-person services will still be available to primary school students who are children of essential workers who cannot make other arrangements. Other schools across the province will remain open, but with additional restrictions in place.

Roussin said the province needs to take action to manage high levels of community transmission that is spreading to schools and putting a strain on the province's hospitals.

“We need to act now to break these transmission chains,” he said.

Manitoba also banned in-person restaurant dining, closed churches and some businesses and dropped capacity at retail stores to 10 per cent as of Sunday, as the province reported more than 500 cases of COVID-19.

Alberta was also preparing to shut restaurant patios and to close personal wellness services such as hair salons and tattoo parlours on Sunday night as the final group of rules announced last week by Premier Jason Kenney were to come into effect.

Hundreds of protesters gathered outside a central Alberta cafe Saturday to protest the health measures, which included shifting schools to online learning, limiting gatherings and forcing workplaces with COVID-19 outbreaks to close.

The province's case count remained relatively steady on Sunday, at under 1,000 on Sunday, with a fifth straight drop in the number of hospitalizations, even as emergency measures remained in place in a few hard-hit areas.

Canada's chief public health officer said on Twitter that infection rates remain high in many parts of the country, and urged people to maintain public health measures even if they've been vaccinated.

“Vaccinated or not...for now we still need to take steps to go out safely,” Dr. Theresa Tam wrote. She urged people to limit social interactions with people outside their households, and to meet people outdoors whenever possible.

Ontario, meanwhile, reported 3,216 additional people have been infected with COVID-19 over the past 24 hours, and 47 more people had died.

Nova Scotia reported 165 new cases, with 138 coming from the central zone in and around Halifax.

The province's chief medical officer of health urged the province's residents to avoid gathering for Mother's Day, given the high case count.

“Now is not the time to let our guard down,” Dr. Robert Strang said in a statement.

“If you don't live with your mother-figure, please celebrate Mother's Day virtually.”

Other premiers and health officers issued similar messages, reminding people to follow health rules to avoid spreading COVID-19 to their loved ones.