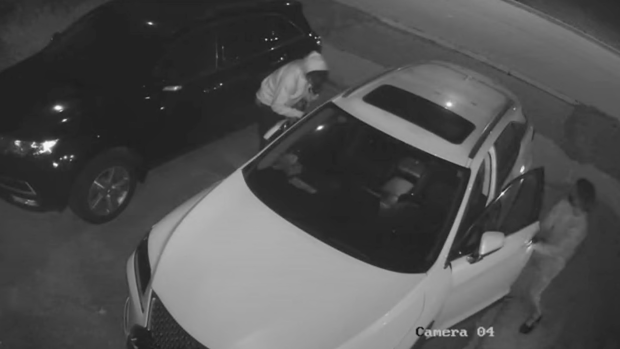 Suspects are seen in this image taken from video surveillance in a York Region vehicle theft investigation. (YouTube/OfficialYRP)

York Regional Police have arrested and charged multiple suspects and recovered 28 vehicles in connection with an ongoing vehicle theft probe.

Over the past several years there has been an increase in thefts of Lexus and Toyota sport utility vehicles from residential driveways in York Region, police say.

The majority of these vehicles were stolen between midnight and 6 a.m.

Thieves have been using tools like screwdrivers to gain access into the vehicles, while ensuring not to set off any alarms, according to police.

Once thieves are inside a vehicle, an electric device, typically used by mechanics to reprogram the vehicle to its factory setting, is connected to a port below the dashboard and programs the vehicle to accept a key that the thieves brought with them.

Once the new key is programmed, the thieves can turn on the vehicle and drive away.

Police say the whole process takes between 10 and 20 minutes.

These stolen vehicles are in high demand overseas and they’re often shipped in containers to areas including North Africa, police say.

On Thursday, police said they were able to execute search warrants in Toronto and Peel Region and recovered 28 stolen vehicles valued at $1.5 million.

Investigators also arrested and charged six suspects in connection with the investigation.

Police have released surveillance video from the investigation.

To prevent future thefts, police encourage vehicle owners to park their vehicle in a locked garage, place a second vehicle behind their Lexus or Toyota SUV in the driveway to act as a physical barrier, use a steering wheel lock, install a lock on the data port or install a video surveillance system.