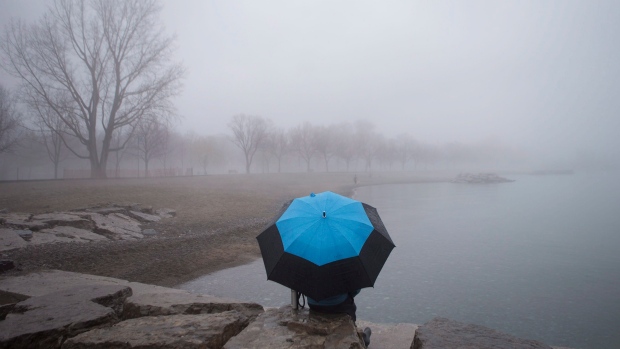 A man sits on the shore of Lake Ontario on a misty day on the lake shore in Toronto, on Thursday, March 10 2016. THE CANADIAN PRESS/Chris Young

A severe thunderstorm warning issued for the City of Toronto has ended.

The warning, which was issued by Environment Canada around 3:30 p.m. on Saturday, said that damaging winds and torrential rainfall were possible.

“Environment Canada meteorologists are tracking a severe thunderstorm capable of producing very strong wind gusts, up to nickel size hail and heavy rain,” the weather agency said in a statement.

Most of southern Ontario remains under a severe thunderstorm watch.

According to Environment Canada, there was a 60 per cent chance of showers in Toronto. The temperature is expected to hit a high of 28 degrees, dropping to about 15 degrees later in the evening.

Sunday is expected to be sunny, with a high of 28 degrees, feeling like 30 degrees with the humidex.