Shelter costs have doubled during COVID-19 and there may now be a 'business case' for big investment in affordable housing: Tory 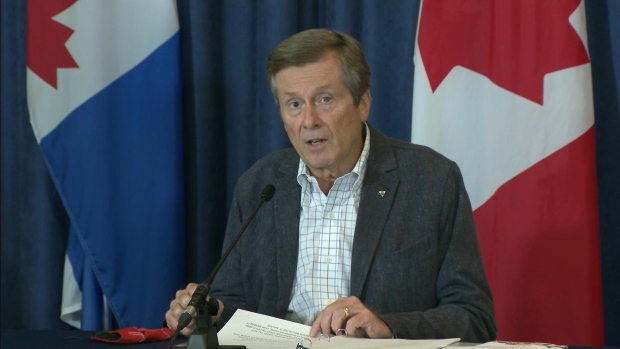 The average monthly cost for each shelter bed the city operates has doubled as a result of the need for physical distancing amid the COVID-19 pandemic and Mayor John Tory says that there is now a “solid business” case for investing in thousands of new permanent affordable housing units.

Tory made the pitch during a press conference at city hall on Tuesday, in which he called on the federal and provincial governments to contribute $733.5 million to an ambitious plan to develop 3,000 new affordable rental homes over the next 24 months.

“Simply put it is now, in the present circumstances with health-related considerations taken into account, more cost effective to build and acquire supportive housing than it is to build and operate more shelters,” Tory said. “What you have here is a clear moral case to act, which we have always had, together with a solid business case for doing it.”

The cost of operating a shelter bed before the COVID-19 pandemic was about $3,300 a month but Tory said that number has since increased to more than $6,000 due to the need to reduce the capacity in shelter facilities, something that the city has done through the relocation of approximately 3,500 shelter clients to more than 30 hotels and other temporary facilities.

He said that as a point of comparison the city can provide permanent affordable housing and supportive housing at a cost of just $2,000 per month with assistance from the federal and provincial governments.

“Moving 3,000 people out of shelters and into permanent housing with supports could provide a cost savings of up to $15 million per month. That is $180 million per year for as long as we need to have the COVID-19 physical distancing standards in place and based on everything we know today that will be probably for some time to come,” Tory said. “Since all governments share in the cost of operating and finding these different kinds of temporary emergency shelters that are increasingly in use all governments would be the beneficiary of those savings.”

The city’s plan is part of a wider effort to build 40,000 new affordable units over the next decade.

It calls for the construction of 1,000 permanent modular homes and another 1,000 new homes that would be created through the acquisition and renovation of existing buildings.

The remaining 1,000 affordable homes in the plan, meanwhile, would be realized through the scaling up of the Canada-Ontario Housing Benefit.

Speaking with reporters, Tory said that he has already been in “frequent contact” with a number of federal cabinet ministers regarding the plan but hasn’t yet received any firm commitments.

Under the proposal, the city would provide $228.5 million to build the modular homes “through capital and operating funding as well as land value” and the other levels of government would contribute an additional $200 million.

The provincial and federal governments would, however, be on the hook for the entire $475 million cost of acquiring and renovating new buildings for use as affordable housing.

They would also be asked to invest an additional $48 million in ongoing supports for shelter clients that will be relocated to the new housing units.

“I think it is very achievable and I think when you put forward the business case that accompanies the moral reasons for doing this it becomes one that the other governments should be embracing rapidly,” Tory said when asked whether the funding request was realistic. “While it involves hundreds of millions of dollars let’s not forget that we have demonstrated and we do demonstrate in the materials that we have provided for the other governments that in fact this will result in the savings of a very substantial amounts of money, millions and millions of dollars not spent and in effect gone through the payment of invoices.”