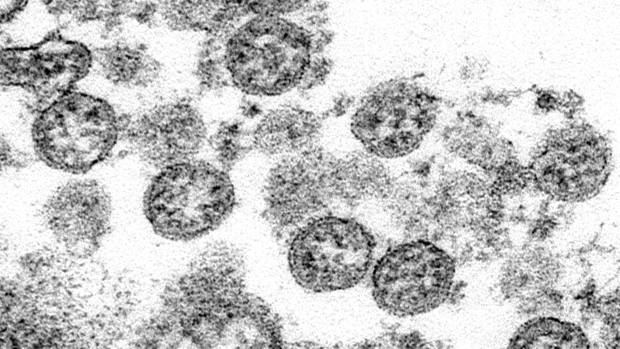 This 2020 electron microscope made available by the U.S. Centers for Disease Control and Prevention image shows the spherical coronavirus particles from the first U.S. case of COVID-19. ockdowns and other tough measures implemented to fight coronavirus disease have led to a dramatic decline in other infectious illnesses such as influenza and sexually transmitted infections, public health data suggest. While experts say delayed diagnoses likely contributed to the drop in reported cases, the numbers are nevertheless stark. THE CANADIAN PRESS/AP-C.S. Goldsmith, A. Tamin/ CDC via AP

TORONTO -- Lockdowns and other tough measures implemented to fight the COVID-19 pandemic have led to a dramatic decline in other infectious illnesses such as influenza and sexually transmitted infections, public health data suggest.

While experts say delayed diagnoses likely contributed to the drop in reported cases, the numbers are nevertheless stark.

For example, the normal incidence of influenza, which typically kills about 8,000 Canadians a year when combined with pneumonia, dropped suddenly in mid-March as anti-pandemic restrictions kept people at home and idled businesses. In fact, the latest federal statistics indicate flu across Canada dipped to its lowest seasonal level in nine years -- and has stayed there at least through much of August.

Similarly, the latest data from Ontario indicate a host of infections typically spread through sexual contact also dropped sharply compared with the same time last year. Reported chlamydia cases fell 50 per cent between March and June compared to the same months in 2019. Gonorrhea fell 40 per cent, while syphilis, which had seen a recent surge, and HIV fell more than 30 per cent. British Columbia has also reported noticeable declines in syphilis and HIV this year but provided no monthly breakdown.

"If you wear a mask, if you stay two metres from someone, if you're washing your hands frequently, that is going to clearly reduce a lot of infections that are transmitted by those routes."

The ban on international travel also appears to have had an effect on illnesses such as measles, which is considered eliminated in Canada but persists abroad. Ontario, for example, which typically sees a handful of imported cases -- 11 between March and June last year -- has reported none this year.

"These data demonstrate the extent to which transmission of common pediatric infections can be altered when close contact with other children is eliminated," the authors write about their study reported in the journal Pediatrics. "Notably, three of the studied diseases, namely, influenza, croup, and bronchiolitis, essentially disappeared with (social distancing)."

Influenza reports from several countries in the southern hemisphere also indicate a dramatic drop in cases.

Experts, however, warn against drawing definitive conclusions, saying various factors besides social distancing could have influenced the declines. Those include infected people staying away from hospitals and health-care professionals for fear of contracting COVID-19, and laboratories that prioritized coronavirus testing over other suspected illnesses.

The drop in influenza -- Ontario's reported incidence of flu and pneumococcal disease also fell drastically after lockdown -- might have been related to a surge in people getting flu shots, as Australia has reported.

"It's a bit too early to tell whether these are real decreases," said Dr. Shelley Deeks, chief protection officer for Public Health Ontario. "It will be interesting to see what happens in the next six months of the year."

However, the authors of the Massachusetts study conclude that changes in care-seeking behaviour had a "relatively modest effect" on the observed declines in child infections.

Regardless, the apparent decline might be a rare silver cloud amid the gloom of a deadly pandemic and disruption of counter-measures that have wreaked social and economic havoc around the world.

Colin Furness, an infection-control epidemiologist with the University of Toronto, said he expected Canada would "knee-cap" influenza this winter.

"We sacrificed so much economically and in terms of our mental health just for COVID," Furness said. "We can all feel a lot better about everything that we sacrificed if we thought there were a whole other wide range of benefits."

At the same time, he warned of a potential resurgence of sexually transmitted infections kept in check by the lockdown earlier this year.

"You may even see rebound promiscuity," Furness said. "It wouldn't surprise me. We've had no experience at all with the effects of a lockdown on these kinds of diseases."

Deeks, too, worries about the potential for a resurgence of communicable illnesses if people start relaxing on social-distancing measures now in place. Nevertheless, the positive impact of anti-COVID measures in terms of infectious disease control are likely to persist, experts say.

One might be -- as Ontario is anticipating -- strong or even record demand for flu shots. Another is heightened appreciation for basic public health precautions.

This report by The Canadian Press was first published on Sept. 18, 2020