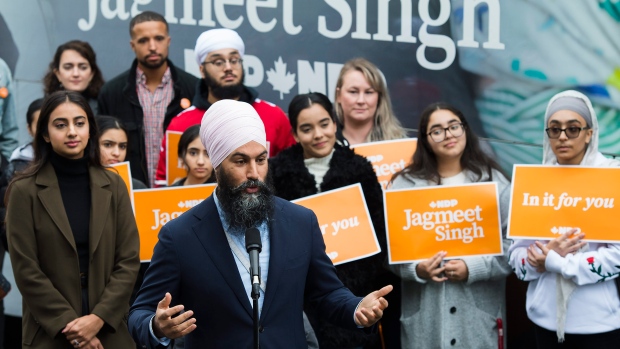 NDP leader Jagmeet Singh speaks to the media after voting in his Burnaby South riding during a campaign stop in Burnaby, B.C., on Sunday, October 13, 2019. THE CANADIAN PRESS/Nathan Denette

Singh is trying to counter a message from the Liberals that they are the only real option for progressive voters, as they have a better shot at forming government.

The Liberal push comes as the NDP is rising in the polls with just eight days left in the campaign.

Singh says people don't get better opportunities when they settle for less and is instead encouraging Canadians to “dream big.”

He says Liberals and Conservatives have for a long time assumed that Canadians will vote for one of those two parties, but Singh says his message to voters is that no one owns your vote.

Singh and his wife voted at an advance poll today in his Burnaby South riding, joking that it was a tough choice but he “went with Mr. Singh.”

This report by The Canadian Press was first published Oct. 13, 2019.