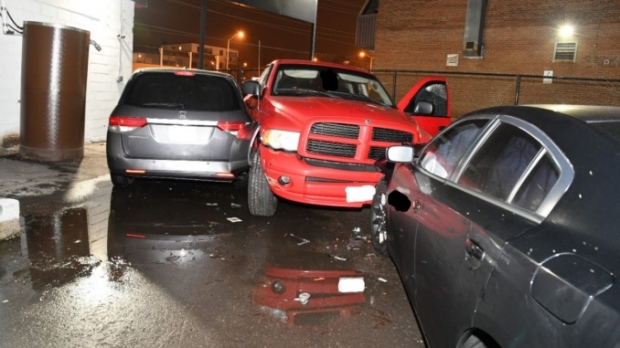 A suspect vehicle in a drug trafficking investigation in Scarborough in January is shown boxed in by two undercover police vehicles. The province’s police watchdog has cleared a cop who shot at the vehicle while acknowledging that his decision to open fire on a moving vehicle may have violated some Toronto Police Service policies.

The province’s police watchdog has cleared a cop who shot a suspect in a drug trafficking investigation in Scarborough this past winter while acknowledging that his decision to open fire on a moving vehicle may have violated some Toronto Police Service policies.

The incident happened in the parking lot of Church’s Chicken, in the area of Midland Avenue and Eglinton Avenue East, back on January 14.

In his report, SIU Director Joseph Martino said that members of the Toronto Police Drug Squad had been investigating the complainant and an unidentified female for weeks and on the night in question had arranged for an undercover officer to purchase crack cocaine from the duo in what was essentially the “culmination” of the probe.

Martino said that the complainant arrived in the parking lot at around 8 p.m. in a red pickup truck. At that point the female passenger in his vehicle got out and got into another vehicle driven by the undercover officer to complete the planned drug deal.

After the woman allegedly handed the undercover officer a quantity of crack cocaine in exchange for money, police moved in and took her into custody. Simultaneously, police in two other undercover vehicles boxed in the complainant’s truck.

At that point the complainant accelerated in reverse in an attempt to flee the scene before slamming into a third vehicle driven by an undercover officer that was blocking his exit. He then accelerated forward and the subject officer, who had been standing in the vehicle’s path, had to quickly get out of the way.

Martino said that the subject officer then fired four shots at the suspect as his vehicle sped towards another undercover vehicle that was blocking his path out of the plaza.

The complainant ended up with bullet wounds to his right hand and left knee and was taken to hospital in serious condition.

In his report, Martino said that the subject officer was “essentially under assault by the complainant wielding a dangerous weapon” and was “within his rights in matching the deadly threat presented by the complainant’s operation of the truck by lethal force of his own.”

He did acknowledge that the officer likely violated Toronto police policies that prohibit members from standing in the path of a moving vehicle with the intention of preventing its escape. That policy, he said, was put in place to avoid incidents like this one where an officer has to resort to using their firearm to protect themselves.

There is also another TPS policy prohibiting officers from firing on moving vehicles unless there is an “immediate threat of death or grievous bodily harm by means other than the vehicle.”

“While the subject officer may have acted improvidently, the officer did not lose the right to defend himself when the complainant drove at him. As I am satisfied that the complainant did so intentionally, and was deliberately using his truck as a battering ram to break free of police vehicles and make good his escape, the subject officer was within his rights in attempting to incapacitate the truck’s operating mind,” Martino said.