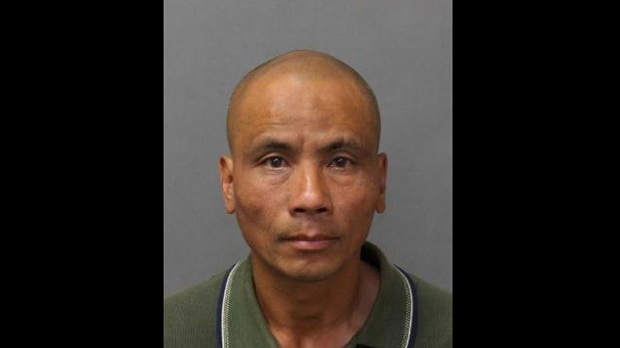 The SIU is seeking to identify the man pictured in this handout image. (SIU)

The province’s Special Investigations Unit has cleared a Toronto police officer who shot a man to death on some railway tracks in the city’s Humberlea neighbourhood in June 2016.

On June 17, 2016, officers from Toronto police sex crime unit, the emergency task force, and two officers from the Canadian Pacific Railway Police were in the area of Weston Road and Starview Lane, near some north-south railway tracks, searching for a 42-year-old male.

The officers were attempting to serve the male with a notice that he had failed to register with the provincial sex offender registry. Sources told CP24 at the time the male had earlier been accused of offences involving children.

The SIU says officers approached the male, who appeared to be eating at a retaining wall near the railway tracks.

After passing through some thick brush, the officers came into a clearing, where one officer lost his footing and fell. The SIU says the officer called out as he fell and the male they sought jumped out of the brush about 10 feet in front of the officers, carrying a large kitchen knife in his hand.

The SIU says officers told them the male charged toward them with the knife.

An ETF officer carrying a conducted energy weapon and a shield in his hands dropped them both and drew his handgun, firing five shots at the subject male.

The subject male then raised the knife above his head and was shot one more time. Another officer fired a conducted energy weapon at the male, and he fell to the ground.

The male was pronounced dead at the scene a short time later.

“(The subject officer) reasonably feared for his own safety, as well as his fellow officers, and his actions were directed towards preventing imminent bodily harm or death. His decision to fire his gun was reasonable,” SIU Director Tony Loparco wrote in his decision.

Loparco said the officers’ did their best to try and apprehend the man without using significant force, but his attack meant they had no choice but to abandon their less-than-lethal options.

Loparco said the police knew the subject suffered from mental health issues, and consulted a psychiatrist before heading out to apprehend him.

The officer who fired his weapon consented to an SIU interview and handed over his notes.

SIU investigators found a knife with an 18 centimetre blade at the scene, underneath a hand of the man who was shot dead. A temporary shelter and campfire used by the man were found nearby.

Despite several appeals after the incident, the SIU says it has not been able to identify the man who was shot dead, though he was known to use several aliases.

He had been confronted by police twice before, including an instance in Jan. 2012 where the man came at officers with a knife and was shot several times, but survived. The SIU cleared officers of any wrongdoing in that incident.

The SIU is seeking public assistance to identify the man pictured in this handout image. (SIU)