SIU investigating after taxi driver carjacked at gunpoint in Toronto 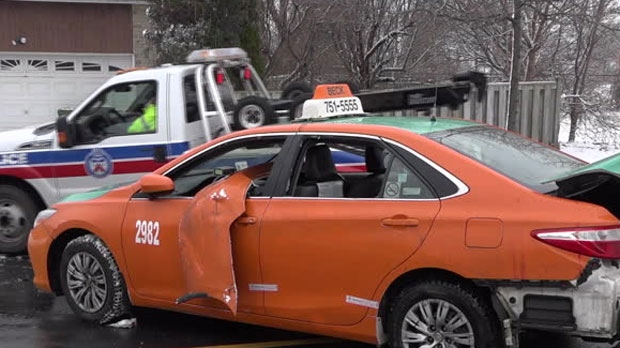 The SIU is investigating after Beck Taxi says a driver was carjacked at gunpoint in Toronto.

The province’s police watchdog is investigating after Beck Taxi says one of the company’s drivers was carjacked at gunpoint in downtown Toronto early Thursday morning.

In a news release issued Thursday, the Special Investigations Unit said Toronto police officers were called to the area of Spadina Avenue and College Street at around 3 a.m. for a reported carjacking involving a cab.

Officers managed to track down the taxi in the area of Clanton Park Road and Wilson Heights Boulevard in North York.

The SIU said an interaction occurred between the responding officers and the 22-year-old driver of the stolen vehicle.

The suspect was arrested and taken to hospital to be treated for a serious injury.

Speaking to CP24 on Thursday, Beck Taxi spokesperson Kristine Hubbard said the driver of the cab was not physically injured.

“From all reports the driver is OK. I mean as OK as you can be after experiencing something like that. But he is at home with his family resting, hopefully sleeping,” she said.

“Thankfully it sounds like he just complied and left the scene unhurt.”

She added that while carjackings involving taxis are not a common occurrence, the driver had the

“appropriate training” to deal with the situation.

“Comply. Remember your life is more important than anything else. Forget the car. Forget anything else that’s in there. Just do whatever you can to be safe,” she said.

Hubbard noted that every taxi is equipped with cameras that are constantly taking still images.

“The cameras are always running in the car so the police will have that,” she said.

Two investigators have been assigned to probe the circumstances surrounding the interaction.

The SIU is an arm’s length agency called in to investigate any interaction between a police officer and member of the public that results in death, serious injury or an allegation of sexual assault.