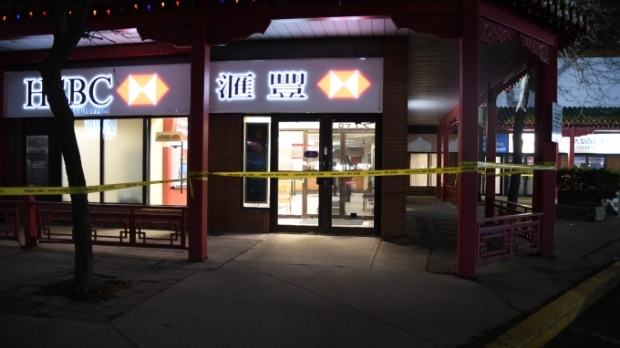 The HSBC Bank at 888 Dundas Street East in Mississauga is shown in this crime scene photo from Nov. 26, 2019. (Special Investigations Unit)

Ontario’s police watchdog says that it will not charge an officer who shot an armed teen in the back during an attempted bank robbery in Mississauga in 2019, despite the fact that the assailant appeared to be running away from them at the time.

The robbery occurred at an HSBC branch at the Mississauga Chinese Centre plaza near Dundas Street and Haines Road on the afternoon of Nov. 26, 2019.

In a report released on Thursday, SIU director Joseph Martino said that the subject officer was investigating an impaired driver nearby alongside three other cops when he was alerted to the in-progress robbery by a passing motorist.

The officers immediately drew their firearms and arrived at the bank “within seconds,” according to the report.

The report says that the 16-year-old suspect spotted the officers as they arrived and immediately ran from a position near the teller counter towards the west wall of the bank while wielding a firearm, which was later determined not to have any ammunition it.

“The officers entered the bank with firearms drawn and turned immediately to their left in the direction to which the complainant had run. Within seconds, a single shot was discharged from the subject officer’s firearm striking the complainant in the lower mid-back,” the report states. 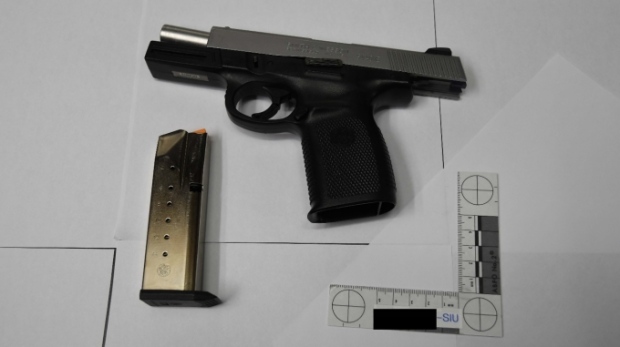 The teen sustained “serious internal injuries” as a result of the shooting and was rushed to hospital by paramedics shortly after he was taken into custody.

Martino acknowledged in the report that “gunshots to the back are problematic in that they can suggest the subject of the wound was facing away from the shooter and therefore not a threat at the time of the gunfire.”

But he offered several reasons for which the subject officer may have felt that the suspect posed an imminent danger, including the fact that bank employees were present in the direction that the teen would have been facing as he ran.

“The officers, including the subject officers, would have known that bank employees were in and around the area. Their health and safety would clearly have been imperilled had the complainant, seemingly armed with a working firearm, been left unattended in the bank,” he said. “The speed with which events unfolded also foreclosed any opportunity for disengagement by the officers. Mere seconds had elapsed from the moment they entered the bank to the confrontation with the complainant.”

The subject officer did not agreed to be interviewed by the SIU and refused to hand over his notes.

Martino said in the report that he is “without direct evidence regarding the officer’s state of mind” as a result. Nonetheless, he said that he is “inclined to believe” that the officer felt it “was necessary to shoot the complainant in order to protect his life and those around him from an imminent risk of death or grievous bodily harm.”