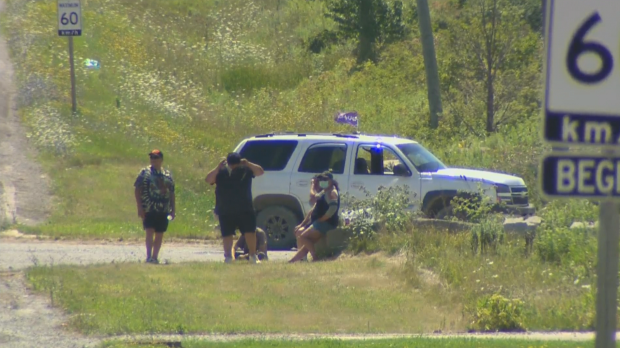 Ontario Provincial Police (OPP) said a court injunction was presented to the demonstrators on July 31 but several people remained on site as of August 5.

CALEDONIA, Ont. - Indigenous demonstrators have returned to the site of a housing development at the centre of a land dispute in southern Ontario, the day after nine people were arrested following a violent clash with police.

Provincial police say they went to the McKenzie Meadows development on the outskirts of Caledonia, Ont., on Wednesday to enforce a court injunction ordering demonstrators off the land.

OPP allege some of the occupiers threw “large rocks” at officers, and officers responded by firing a single round from a weapon that shoots rubber bullets.

They say nine people were arrested and later released.

Protesters have dubbed the site “1492 Land Back Lane” and began occupying it more than two weeks ago, arguing the development violates the sovereignty of the Haudenosaunee people.

The Haudenosaunee - a group that includes the Mohawk, Oneida, Onondaga, Cayuga, Seneca and Tuscarora First Nations - are also known as the Iroquois or the Six Nations, and were involved in a similar land dispute in 2006.

The occupation drew the premier's ire on Thursday, and while he said he could not and would not direct the police, he made his position clear.

“You just can't go in and take over people's future homes.... It's wrong,” Doug Ford said during a news conference.

He called the incident “uncalled for,” “disturbing” and “unacceptable.”