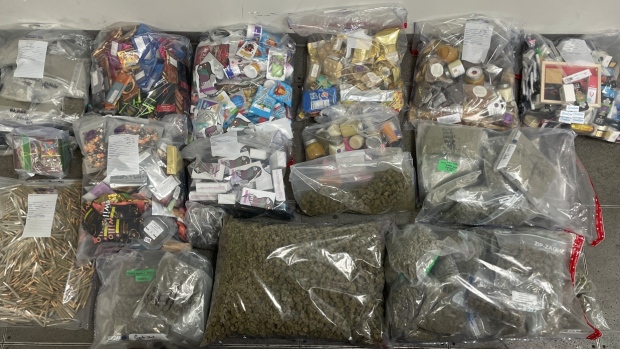 Toronto police say they seized cannabis and psilocybin items during a search of a pot shop in the downtown area. (Toronto Police Service)

Six people have been charged in connection with a drug investigation into an alleged unlicensed cannabis store in Toronto’s CityPlace neighbourhood.

Police said the investigation, which began earlier this month, looked into 1Tonamara, an establishment in the area of Fort York Boulevard and Spadina Avenue.

They alleged it was selling cannabis and psilocybin products without a license and not regulated by the Alcohol and Gaming Commission of Ontario.

As a result, police executed a search warrant on Monday which resulted in the arrest of six people and the seizure of a large quantity of cannabis in dried form, pre-rolled joints, oils, hash and edibles.

They added that psilocybin in chocolate bar form was also seized as well as an alleged small quantity of proceeds of crime.

They are scheduled to appear in a Toronto court in February 2023.