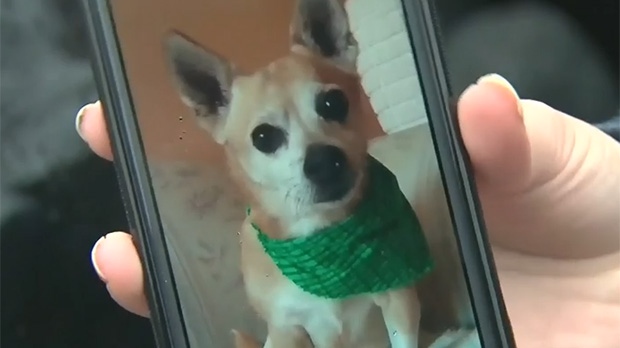 A small dog was taken to a vet with serious injuries and his owner treated for a bite to the hand Saturday after the small animal was attacked by two larger dogs in Mississauga.

Peel police say a woman was out walking her little dog, Rusty, on Greenbelt Crescent in the Winston Churchill Boulevard and Burnhamthorpe Road area around 2:30 p.m.

Police say that as the pair passed by one home with an open gate, two large Cane Corso dogs came darting out and attacked Rusty, a Chihuahua-Pomeranian mix, grabbing him by the throat.

Neighbours came rushing to help and eventually managed to free the little dog.

One man who came to help described the scene.

“They were trying to get the big dog to drop the little dog but he wouldn’t, so I grabbed a planter that he had and struck the dog on the head with it – it was heavy – and shattered it,” Jim Rathgeber told CTV Toronto. “When that happened the (large) dog dropped the little dog and we shuffled them out of the way. The people with the dog were hysterical and it was bleeding all over the sidewalk.”

Rusty was then taken to a vet with serious injuries, while his owner was treated for minor injuries to her hand.

The two large dogs, a male and a female estimated to weigh between 90 and 100 pounds each – ran off after neighbours intervened, but eventually returned to the yard they came from. The dogs were not seized.

Peel police were called to the scene, but said it would be up to animal services to press any possible charges.

Police say it’s not yet clear whether Rusty will survive.

- With a report by CTV's Calvin To