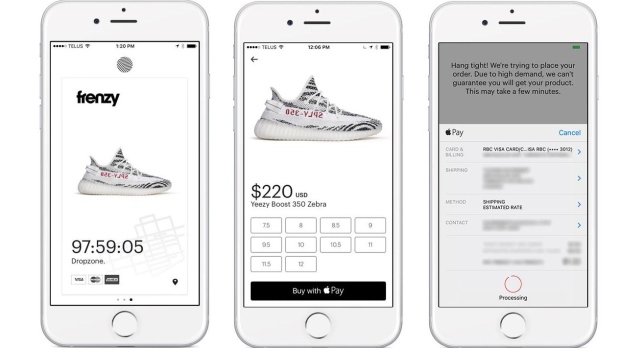 The latest hot commodity for your feet – which retails at $350, but is reselling for more than $2,000 in Toronto, according to Dalton Jackson – is being sold for $1 by an e-commerce software company, Shopify Inc. through a mobile app called Frenzy. (Frenzy)

Forget standing in line outside the Adidas Original store, Toronto sneakerheads will have a chance to get a coveted pair of one of Kanye West’s Adidas Yeezy’s for $1 on Friday thanks to a new mobile shopping app.

“The Zebras are one of the more exclusive editions of the Yeezy,” said Dalton Jackson, owner and founder of Sole Exchange Canada, which organizes sneaker fairs in Canada and the U.S. “They seem to be the most popular in the sneaker world right now. It is a must-own.”

This sneaker is hard to get ahold of.

“You have to sign up to win a chance of buying a pair,” he added.

Now the latest hot commodity for your feet – which retails at $350, but is reselling for more than $2,000 in Toronto, according to Jackson – is being sold for $1 by an e-commerce software company, Shopify Inc. through a mobile app called Frenzy.

“Frenzy reduces the friction of purchase and sale of highly exclusive products at events, through its new dropzone feature,” said co-creator and product manager of Frenzy, Tucker Schreiber.  “It’s a way to sell incredibly sought-after products.”

This technology saves you from “waiting in line for days or evenings when it’s cold,” said Kevin Donnelly, community growth manager of Frenzy.

According to organizers of the event, Toronto users will see the secret dropzone location at noon on Twitter. A countdown to the sale start time will then begin within the app.

“Dropzone sections off a geofenced area in Toronto that will appear automatically in the app, so only user in that area can access the product,” Schreiber told CP24.

When the clock reaches zero at 4:20 p.m., the ability to purchase the shoes will be ‘unlocked’ for everyone within the dropzone.

The first 12 users to tap through will be able to purchase the shoes.

But it won’t necessarily be easier to get the shoes.

With only a dozen pairs available for $1 tomorrow, Jackson predicts the number of sneakerheads “trying their luck will be insane.”

Shopify Inc. has purchased a dozen of this line of Yeezy’s from StockX, an online marketplace for sneakers, and is covering the cost of the sneaker’s original retail value.

“All the shoes are certified,” Schreiber explained.

According to Schreiber this is the first time the dropzone feature, which allows retailers to release exclusive products within a particular geographic location, will be used in Canada.

“We chose these shoes because of the incredible power of sneaker culture right now,” added Donnelly.  “The release with Yeezy’s really shows off the true power of what dropzones can be.”