Some parents, child-care providers call for updates to COVID rules 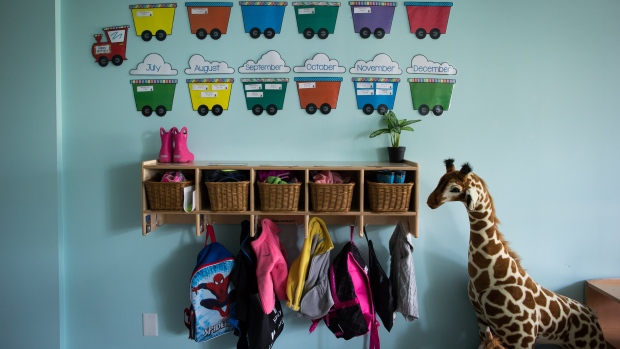 Children's backpacks and shoes are seen at a daycare on Tuesday May 29, 2018. (THE CANADIAN PRESS/Darryl Dyck)

TORONTO - The staff at Kim Yeaman's child care centre spend time filling, emptying into the garbage, and cleaning 15 small bins for sensory materials like sand to comply with COVID-19 policies, and recently she has been wondering why.

Pandemic-era guidance for child care centres doesn't allow for group sensory play, such as water tables, and Yeaman isn't so sure that makes sense for a room full of toddlers.

“That just happens naturally. They lick each other. I can't stop them from licking each other.”

The COVID-19 regulations for Ontario child care centres haven't changed substantially since they reopened last summer. Some parents and providers say while staff should continue to wear masks, it may be time to revisit other policies, from allowing singing once again to letting parents inside the building.

“I just feel like, as the entire province continues to move through the stages, there hasn't been any stages for child care,” Yeaman said.

“I see Stage 3 when Toronto FC is going to have (thousands of) people in the stadium and parents can't walk their children into the centre?”

The rules say that “as much as possible, parents should not enter the premises,” so kids are now dropped off at the doors, often handed off to a teacher who is not their own, leaving parents with little to no interaction with the people caring for their children all day.

Katie Liddell's two-year-old son started daycare during the pandemic, so other than one tour, she has not set foot inside the Caledon, Ont., centre.

“So that's a whole part of his life I don't know,” she said. “I get full reports, I know what he does all day. But to see them in action in there - as a parent you imagine what that's like, but you don't actually know.”

Liddell said she has been impressed with her centre's adherence to protocols, and would feel comfortable if parents were now allowed inside, on a limited basis.

Some child-care providers say the requirement is not only hard on parents, it's very taxing operationally.

Karen Eilerson, of Discovery Child Care in Barrie, said she needs staff to essentially work six hours a day at the door.

“I need at least two or three extra staff to run children back and forth to families,” she said. “In an industry where there's a major shortage of qualified staffâ€¦to have those staff need to be used for something else is really difficult.”

With the Canada Emergency Wage Subsidy ending soon but the additional staffing burden the same, child care centres could find themselves in trouble.

“We basically have fewer children and double the staff,” Eilerson said. “With these rules continuing, we won't be able to operate.”

Toronto mother Sophia He said she wouldn't feel comfortable just yet with parents being allowed back in the buildings. But she thinks the rules around group sensory play and singing could be revisited since children are in the same classroom all day anyway.

“Since they are not wearing face masks and they are still running around, I don't think not doing these activities is going to reduce the risk of the children catching the virus,” she said.

As for the risk to staff, Eilerson wonders if the PPE requirements could be loosened. Staff currently have to wear both medical masks and a face shield or goggles. But Eilerson notes that the latter are tools to protect the wearer and all of her staff members are fully vaccinated.

Carolyn Ferns, with the Ontario Coalition for Better Child Care, said staff are also run off their feet with the cleaning regulations. The understanding of surface transmission a year ago was different than it is now, but staff are still spending so much time on “hygiene theatre,” she said.

“All of the additional cleaning and sanitizing and keeping each child's toys separate and constantly disinfecting the surfaces - that's still happening even as we've now understood that those aren't the things that drive transmission,” she said.

“It needs to be refocused on air filtration and ventilation, and not on making (early childhood educators) be doing all this extra cleaning.”

A statement from a spokeswoman for Education Minister Stephen Lecce did not signal that any policy updates are imminent, suggesting that the current rules are working.

There have been just 50 cases in staff and children across the province in licensed child-care settings over the past two weeks. Non-school-aged kids are largely unmasked while at daycare and can't be vaccinated yet, though they are also considered to be low risk for serious illness.

This report by The Canadian Press was first published July 25, 2021.