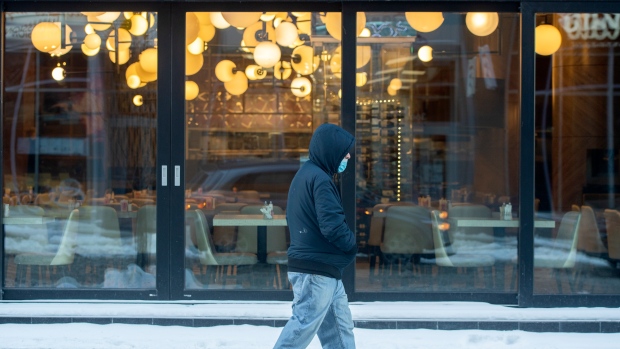 A man walks by an empty restaurant following a COVID-19 press briefing by Quebec Premier Francois Legault in Montreal, Thursday, January 20, 2022. The COVID-19 pandemic continues in Canada and around the world. THE CANADIAN PRESS/Graham Hughes

Some provinces were pointing to glimmers of improvement Thursday in the Omicron-stoked fifth wave of the pandemic, but the outlook was not as positive in others.

Ontario announced a plan to start loosening COVID-19 restrictions by the end of the month, but Quebec said it was too early to ease any public health measures.

Modelling in Saskatchewan predicted a possibility of a record-high of people in hospital, while Alberta said hospitalizations will continue to increase.

Ontario Premier Doug Ford said Thursday that his province is to begin easing restrictions on Jan. 31 after they were brought in earlier this month. That includes boosting the size of social gatherings and reopening businesses, such as restaurants, gyms, cinemas and museums, but with capacity limits.

Spectator areas at sporting events, concerts and theatres will be able to operate with no more than 500 people, or half capacity for smaller venues.

A directive announced by Ford on Jan. 3 for hospitals to pause all non-urgent surgeries and procedures is to remain in place. Health Minister Christine Elliott said it is too soon to lift that order, because the peak of admissions to intensive care units isn't likely to happen until mid-February.

If trends don't become a concern, restrictions are to be further eased Feb. 21 and again March 14.

Ford said he's confident the worst of the fifth wave has passed.

“While we can be confident in how far we've come, I want to be crystal clear: we're not out of the woods yet,” Ford cautioned.

“The coming weeks will continue to pose real challenges, especially to our hospitals.”

Alberta Premier Jason Kenney also said there were early signs the province has “reached and surpassed” peak COVID-19 cases in the fifth wave.

“If the (Omicron) variant performs in Alberta like it has in jurisdictions all around the world, we can reasonably expect that we may now be beginning on the down-slope of transmission,” Kenney said.

But the swell of expected hospitalizations could continue to put more pressure on an already overwhelmed health system.

In Quebec, the number of people in hospitals with COVID-19 dropped for the first time since Dec. 16. The Health Department said there were 14 fewer people than the day before, although hospitalizations still stood at 3,411. Some 285 people remained in intensive care.

Projections from a Quebec government health-care research institute suggest the drop will continue. The institute said it expects about 200 new daily admissions by the end of January. Quebec has been recording between 296 and 470 new hospitalizations every day for the past week.

But Quebec Premier Francois Legault said COVID-19 restrictions cannot be eased because the situation in hospitals remains too fragile.

“The situation will continue to be difficult for the next few weeks,” Legault said. “I understand that we are all tired, but lives are at stake. We are currently at the limit in our hospitals.”

Prince Edward Island said COVID-19 recoveries were outpacing new cases. The province reported 249 new infections along with 292 more recoveries. There were 2,471 active cases reported, down by 43 from Wednesday.

Newfoundland and Labrador health officials said kindergarten to Grade 12 classrooms are to reopen Tuesday. Students will have to take two rapid tests before returning to school.

Tony Stack, chief executive officer of the province's English school board, said there is plenty of help available from retired teachers, teaching assistants and about 1,100 substitute teachers if large numbers of instructors have to stay home.

The news in Saskatchewan was more grim. Leaked government modelling showed a best-case scenario of more than 500 COVID-19 patients admitted to hospital by mid-February - nearly double what the province experienced during the Delta wave last fall.

The unions asked Premier Scott Moe to immediately bring in recommendations made by the chief medical health officer, which include a 10-person cap on gatherings and suggesting people limit interprovincial travel.

Moe said modelling is only one source of information the Saskatchewan Party government considers. It places a “greater emphasis on closely tracking actual real-time data from across Canada to inform our COVID-19 response,” he said in a statement.

Moe pointed to the province's hospitalization rate, which he said is 34 per cent below the national rate.

COVID-19 hospitalizations have increased 114 per cent in the last month to 215, including 23 patients receiving intensive care. During the province's Delta peak, there were 356 in hospital, the most during the pandemic.

“The government recognizes that hospitalizations are rising and will continue to rise for some period of time,” Moe said. “However, we see no clear evidence that lockdown measures have reduced hospitalizations, ICU admissions and deaths in other provinces and, as a result, there is no reason to impose harmful new restrictions in Saskatchewan.”

- With files from Allison Jones in Toronto, Jacob Serebrin in Montreal and Mickey Djuric in Regina

This report by The Canadian Press was first published Jan. 20, 2022.