A number of residents are being allowed to return to their homes tonight after a deadly home explosion shook a Mississauga neighbourhood Tuesday.

“As of this evening, officials working on site have deemed that some residents can now return to their homes as the perimeter has been further reduced,” the City of Mississauga said in a statement Wednesday night.

An estimated 25 homes were damaged by the explosion on Hickory Drive on Tuesday afternoon, six of them severely damaged.

Utilities were also shut off to dozens of homes that were near the blast site.

[IN PHOTOS: Images of the wreckage after Mississauga home explosion]

Speaking with reporters on Wednesday afternoon, Fire Chief Tim Beckett said that work is underway now to assess the structural integrity of the evacuated homes but he said that it will take until tomorrow before some residents will be allowed to return home.

“Our building inspector is going through to make sure the homes are stable then we have to reconnect gas to the homes and make sure we have the hydro hooked up,” he said. “That will take us into tomorrow and then we will work on a systematic approach to return people back to their homes where we can.”

While some residents are being allowed to return home tonight, Beckett warned that others will “not be going home for some time” due to the extent of damage to their homes.

“We are in the process right now of working with Peel police and staff from the building department and fire prevention division to ensure those residents get notified on that,” he said.

Cause of blast still unclear

A cause of the explosion, which occurred on Hickory Drive shortly before 4:30 p.m. on Tuesday, remains unknown at this point and investigators from the Ontario Fire Marshal’s office are expected to remain on scene sifting through debris into the weekend.

Speaking to reporters Wednesday, OFM investigator Jeff Minten said they will be looking into all possible causes, including whether the blast was accidental or deliberate.

“We are not anywhere near the epicenter of this investigation. We are on the peripherals working our way in and we are trying to identify any fuel and any potential cause to this incident,” he said. “That is going to take some time.”

The OFM, which is the lead investigative body in the case, is working closely with Peel Regional Police.

Little is known about the person killed in the blast. On Wednesday morning, Peel paramedics confirmed that the victim is female.

Police Chief Jennifer Evans said they are waiting on next-of-kin notification before releasing any details about the victim.

It is also unclear who lived in the home where the explosion occurred.

The police chief confirmed that they are investigating whether or not hand-written letters located around the site of the blast are connected to the case in any way.

“Citizens reported seeing some pieces of paper with possible information that may lead to the cause of this investigation. We are still in the initial stages on that but we are pursuing that as well,” she said.

“At this point it is still too early to tell.”

Minten said that while the devastation of the explosion is “pretty significant,” it was relatively contained.

“I think it is fortunate we don’t have more injuries,” he added.

Many residents not sure when they will go home

Speaking to CP24 Wednesday morning, paramedics confirmed that 13 others suffered minor injuries when the blast sent debris flying throughout the surrounding area.

Twelve patients who suffered cuts and bruises were treated on scene and released and one person, who also suffered minor injuries, was taken to a local hospital.

The explosion prompted officials to evacuate a number of homes in the area Tuesday afternoon.

Mississauga Mayor Bonnie Crombie said natural gas, hydro and water had been cut off to 58 houses near the blast zone and an estimated 25 homes were directly impacted by the explosion, six of which were heavily damaged.

Damage to the homes included blown-out windows and damaged shingles.

Building inspectors went through the area today, assessing the extent of the damage. Those who are permitted to return to their residence today are advised to call 3-1-1 if they come across damaged property.

Officials confirmed that some homes may have to be demolished as part of the investigation.

Beckett said they are confident all people in the blast zones were accounted for after dogs were called in to search for live victims among the debris late Tuesday night.

On Wednesday morning, Beckett said the perimeter for evacuations had shrunk.

“The perimeter that we have established now is Dixie to the east, Rathburn to the south, Hickory Drive to the west, and then the top end of Hickory Drive at Dixie is the northern boundary,” he said, adding that a number of residents will be permitted to return to their houses.

At around 10 a.m., people in the neighbourhood were seen retrieving items from their houses.

The homes still affected by the evacuation include 4222 Dixie Road, 1359 Rathburn Road, 1355 Rathburn Road and all homes on Hickory Drive.

Residents displaced by the blast were told to register at the Burnhamthorpe Community Centre, located at 1500 Gulleden Drive, to let officials know they are safe. The reception centre will be open until 11 p.m. Wednesday. Affected residents are also able to call Peel Region at 905-791-7800 to arrange accommodation.

Crombie told CP24 Wednesday that she was pleased to see how the community came together to help one another.

"Neighbours all opened their doors to each other. It was wonderful to see," Crombie said.

"There was a lot of uncertainty. What happened? Why did it happen? Will it happen to us?"

One witness at the scene told CP24 Wednesday that the impact of the explosion blew his living room shutters off the hinges.

He said he was on the phone with his daughter when he heard a "loud, sharp bang." He said his phone immediately went dead.

"I’ve never heard anything like that before," he added.

"I thought it was the end of the world or something."

Multiple people reported seeing a large cloud of dust rising into the air following the blast. 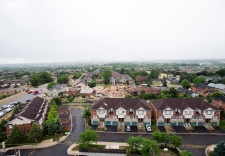 Firefighters and emergency personal work at the scene after a home explosion happened in Mississauga, Ont., on Tuesday, June 28, 2016. THE CANADIAN PRESS/Nathan Denette

The aftermath of a home explosion on Hickory Drive in Mississauga is pictured. (Zed Zidaric /Submitted)