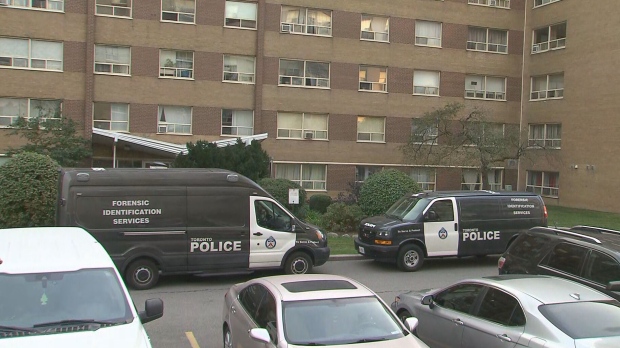 Toronto police say they are investigating a double homicide after reports of a stabbing in the area of Rexdale Boulevard and Islington Avenue.

Police say a 28-year-old man has been charged in connection with the deaths of his parents, who were found deceased inside an Etobicoke apartment on Wednesday.

Officers were called to the building, located near Bergamot and Islington avenues, around 1:40 a.m. after receiving a call about a stabbing.

According to investigators, a man and a woman were found deceased inside an apartment and a man was found nearby with stab wounds.

The injured person was transported to hospital with non-life threatening injuries.

A suspect identified as Toronto resident Alpha Henry was taken into custody and charged with two counts of first-degree murder in connection with the incident.

Police say the suspect is the son of the victims.