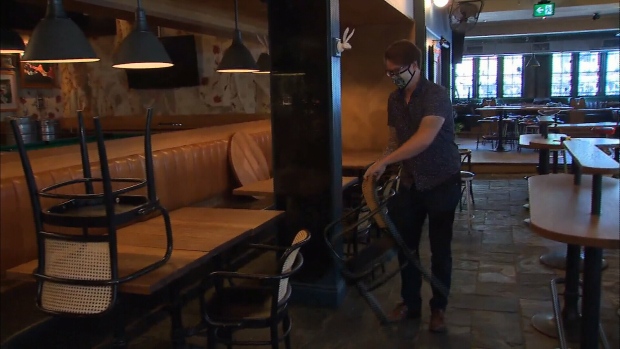 Some southern Ontario restaurants are making the tough financial choice to bar out-of-town customers from indoor dining as COVID-19 cases surge in nearby hot spots.

Ramshackle Industries, which owns four restaurants and bars in Stratford, Ont., first introduced the policy when restaurants reopened in June, slowly dialing it back as the pandemic waned this summer.

Now that the province has reintroduced tighter restrictions in Toronto, York and Peel regions and Ottawa amid the second wave of COVID-19, Ramshackle owner Jessie Votary said the rule is being enforced again.

Tourists are a “huge part” of the customer base in Stratford, especially in the summer months, but Votary said the safety of employees at the worker-owned businesses had to come first.

The restaurants have been explaining the rules before seating customers, with staff checking IDs in a handful of cases, and some non-locals have been turned away from indoor dining.

Votary said reactions have ranged from understanding to upset.

“We have people who throw up their hands and storm out, we have people who swear at the staff, but those people are merely showing we made the right decision to ask those questions,” she said.

Staff take a conversational approach to discussing the rule and they work to find alternatives for out-of-town customers, such as ordering take-out.

“It really is about being pleasant humans,” Votary said. “It's about setting boundaries and then having conversations.”

Full-time workers earn a living wage at the establishments, rather than relying on tips, which Votary said made it easier to keep up with salaries while weathering some hits to profits.

The City of Stratford opened an outdoor dining area this summer with space for 200 people to bring their food and alcohol from local restaurants, which helped Ramshackle restaurants direct visiting customers outside to enjoy their takeout.

While Ramshackle Industries was an early adopter of local-only dining rooms, other establishments already battered by the pandemic are taking a similar approach in the face of rising infection rates near their communities.

The Ale House in Cobourg, Ont., announced Wednesday it was limiting indoor service to locals in response to the restrictions on Toronto, which is an hour's drive away.

Owner Todd Oberholtzer said he struggled with the decision but ultimately made the move to protect the community, which has many older residents and employees who work multiple jobs in town.

“It's very difficult for me,” Oberholtzer said. “I was just hoping to do something for my community.”

The small pub already lost significant business this summer, with less seasonal tourists and local residents stopping in, and no outdoor seating area.

There is a sign on the door explaining the locals-only rule, but Oberholtzer said it's tough to enforce. He recognizes many of the regulars in the community already, and plans to take enforcement on a case-by-case basis.

“We kind of do it more of an honour system than anything else,” he said. “I just really don't want to get shut down again.”

Romby's Tavern and Smokehouse in St. Catharines, Ont., announced a similar policy just before Thanksgiving weekend. In an Oct. 9 Facebook post, the restaurant said proof of Niagara residency would be required to dine in “as an extra safety precaution for our staff, our customers and their loved ones.”

“Niagara, we are getting closer to another shutdown, let's do what we can to avoid that for the sake of EVERYONE,” the post said.

Other business types have been forced to adapt quickly to the targeted restrictions during Ontario's second COVID-19 wave, tackling the challenge of customers who would usually be welcome hopping between regions in the densely populated Greater Toronto Area.

Earlier this week, gym chains L.A. Fitness and GoodLife Fitness asked their clients not to travel from Toronto and Peel Region to work out at open facilities nearby.

GoodLife took the measure of freezing GoodLife members' accounts in hot-zone regions on Oct. 10, preventing them from booking workouts in other areas.

In Stratford, Votary said the pandemic has already put restaurants in “an impossible situation,” so the loss of a few indoor diners doesn't make much of a dent in an already brutal year - and community spread would make matters worse.

“A COVID infection in our team or a rise of cases in our community that shuts us back down to takeout only is an additional loss,” she said.